Polyolefin fibers, including spunbond nonwoven, currently represent about 11% of all synthetic fibers consumed worldwide. China is the largest supplier, followed by Europe and the Americas.

Polyolefin fibers are available as continuous filament yarn, monofilament, slit, or fibrillated film and staple. Spunbonded nonwovens are now also included in this report, since spunbond is often accumulated with continuous filament in the official statistics. Moreover, spunbond nonwovens share many end-use markets with staple-laid nonwovens. Among the different types of polyolefin fibers, texturized continuous filament yarns are also common. Some polyolefin pulp products are designed for use in paper and corrugated board production and others for use as fibrous filler in concrete, as a replacement for asbestos.

The vast majority of polyolefin fibers are used in consumer products. The largest end-use market is represented by nonwoven fabrics (either staple-laid or spunbond), which, depending on their manufacture and characteristics, are used in many different applications. Uses include personal care, sanitary and medical applications, agricultural fabric, construction sheeting, automotive fabric, geotextiles, filtration media, and industrial wipes. Nonwovens also represent the fastest-growing sector. The bulk of consumption is in China. 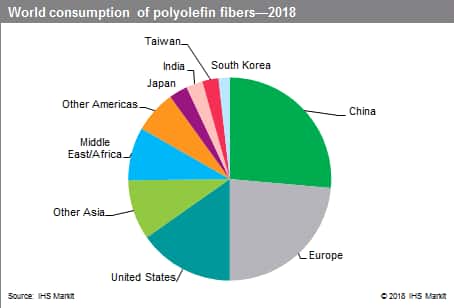 Carpets and rugs have historically been the major end-use market for polyolefin fibers, but the market has gradually lost importance, as a result of changing consumer preferences for floor covering. Polyolefin carpet yarns can be used to manufacture tufted and woven carpets and rugs as well as synthetic turf. Slit films or spunbond polypropylene is usually employed to manufacture the primary and secondary backing substrate for tufted carpets.

Polypropylene is the predominant polyolefin fiber used in textile applications; polyethylene fibers are also used, though generally in small volumes and for specific applications. The physical properties of polypropylene and polyethylene, especially tensile strength, abrasion resistance, and inertness to most chemicals—including water—make them wellsuited for functional applications. Predominantly used in nonwovens but also in carpets and rugs and in industrial applications, polyolefin fibers have basic property limitations, such as poor dyeability and the inability to maintain a crease or pleat (polypropylene’s low glass-transition temperature would cause a pleat to relax in the dryer), which have generally limited their growth potential in the apparel and home fabrics markets.

Until 2000, polyolefin fibers had been one of the fastest-growing segments of the synthetic fiber industry. This growth was due primarily to high growth in grassroots production capacity in developing countries and increasing use in carpets and rugs and in nonwoven fabrics in the industrialized nations. Since 2000, growth has slowed. Particularly in the developed economies, the decrease in consumption has been linked to the slump in carpet yarn demand as well as to an escalation in the price of polypropylene resin, which in turn affected the price of polypropylene fibers. Over the last couple of years, the market has recovered, thanks to a growing economy and recovered housing market.

Nonwoven applications in China will be the driver of growth. Demand from industrial applications (ropes and nets and FBIC bagging) will also grow throughout all regions. India is expected to have the fastest demand growth. An increasing population and standard of living will spur consumption of polyolefin fibers for textiles and in the nonwoven sector for both sanitary and technical applications (i.e., geotextiles, filtration). Slit film consumption for woven sacks and bags is also growing rapidly, as India produces them for both the domestic and export markets.