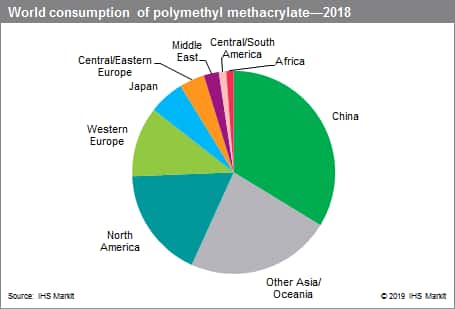 China remains as the world’s largest consumer of PMMA. However, consumption growth has slowed in recent years as the country’s downstream industry continues to mature. The supply has also been significantly affected by the ban on plastic scrap imports, which resulted in a sharp decrease in production via recycled PMMA scrap. In China, PMMA use is dominant in construction (lighting fixtures, sanitaryware, and glazing) and automotive applications, while electrical/electronics use (liquid crystal displays, LED flat panel televisions, and notebooks) is the most significant market in most of the other countries in Asia.

Other PMMA molding and extrusion products include medical, automotive, appliances, lighting fixtures and lenses, housewares, appliances, optical discs, and film. Together, these uses account for the largest share of PMMA consumption and are expected to have the highest growth during 2018-23.

As of early 2019, the top five world producers of PMMA represented more than half of the total world capacity. The largest multinational companies, in terms of PMMA capacity/production, were Mitsubishi Chemical, Evonik, and Altuglas (Arkema). Chi Mei Corporation and Sumitomo Chemical are more regional, but are also in the top five.

As the major end.use markets for PMMA are construction/remodeling and automotive/transportation, consumption of PMMA is largely influenced by general macroeconomic conditions. PMMA consumption will continue to follow the patterns of the leading world economies. During 2018-23, moderate world consumption growth is forecast for PMMA. Factors sustaining this growth include continued recovery in world construction markets, as well as a healthy automotive industry, on a global level. Motor vehicle production has shown gains in most regions, and will continue to improve during the forecast period. In addition, increased disposable income, increased use in construction/architecture and new LED lighting introductions, and use in electronics will push up demand. In the longer term, PMMA should offer more solutions for the solar industry and other electronic devices.