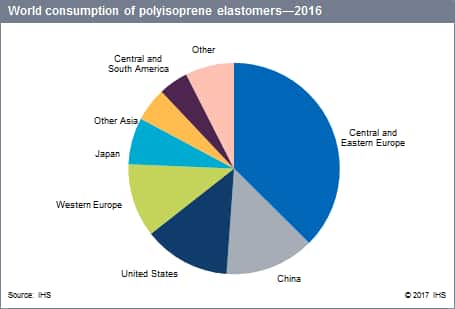 Approximately 72% of world IR consumption in 2016 was for use in tires and tire products. The global polyisoprene elastomers utilization rate was on the low side in 2016, at about 59%. This was due primarily to the very low utilization rate in China (14%).

In North America, the United States accounted for 80% of total consumption in 2016. In the United States, the majority of IR consumption is for domestic tire production, which represented 63% of total IR consumption in 2016. Polyisoprene is consumed in place of, or in blends with, natural rubber or other elastomers in tires. In developed countries, polyiosoprene loadings are generally higher in tires as a result of quality control and narrower performance requirements in highperformance tires. In the medical and health care arena, polyisoprene consumption has been growing; continued concerns regarding allergic reactions to proteins present in natural rubber have prompted increased usage of polyisoprene rubber and latex in some applications.

China began production of polyisoprene rubber in 2010. During 2013–16, the market for isoprene was supplanted by the much-lower-priced natural rubber (NR) and large domestic stockpiles of NR, which had a negative effect on Chinese supply and demand for IR. Moreover, polyisoprene technology in China is neither mature nor advanced. The application for light-colored polyisoprene elastomers in hose and wire applications largely relies on imports. The import volume has also been significantly influenced by weak demand in recent years.

In the last several years, lower natural rubber prices have been placing downward pressure on polyisoprene elastomers. However, an uptick in market prices occurred in early 2017.

Tires and tire products continued to dominate consumption of polyisoprene elastomers in 2016. Mechanical rubber goods assumed the second position at 12% of global consumption, followed by medical applications (8%), footwear (4%), and other items (5%). Medical applications will continue to have the fastest consumption growth during 2016–21.