All of these polymers have excellent electrical and physical properties in addition to their high thermal and oxidative stability. Because of this combination of properties, these polyimides are used in aerospace, electronics, and various other industrial applications. “Pure” polyimide resins (without alternating ester, amide, or ether linkages) are hightemperature- resistant polymers that retain a significant portion of their physical properties in short-term exposures at temperatures exceeding 500°C. Other polymers that contain imide linkages have thermal resistances over a wide range of temperatures of at least 200°C.

The following pie chart shows consumption of polyimides and other imide polymers by major region: 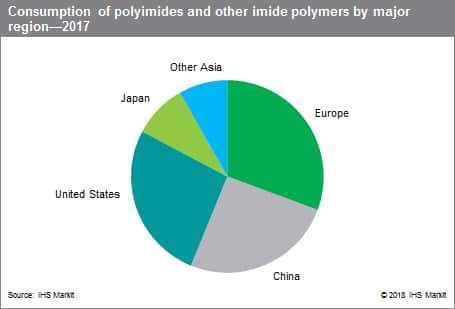 The fastest-growing market is expected to be electronics, as polyimide films are used to make flexible printed circuits for mobile phones and other devices. Transparent polyimide films are of interest as consumers want to replace glass with organic films to make flexible, lighter-weight flat panel displays, imaging sensors, solar cells, and other products. A new colorless polyimide (CPI) film plant is under construction that will be used in new types of mobile phones scheduled for commercialization in 2022.

The market believed to have the highest potential for growth is molding resins, where polyimides and other hightemperature polymers continue to displace traditional materials of construction like metals. Polyimides have the advantage of high flame retardancy so they have been used for a number of years in aircraft interiors. Other uses include bearings, bushings, seals, thrust washers, and valve seats for applications in jet engines, photocopying machines, computer printers, air compressors, and steam turbines.

Each of the key world regions—the United States, Western Europe, Japan, and China—has a unique supply/demand situation because of different local market characteristics and supply sources for certain types of polyimides.

During the 2010s, demand was particularly strong from the electrical/electronics market (including films and use in the aircraft, aerospace, and military markets among others). Automotive, aircraft/aerospace (particularly new commercial aircraft), and food service markets have also helped drive consumption of polyimides and imide polymers, as companies require products with properties such as higher service temperatures (i.e., increased thermal performance), greater toughness and flexibility, easier processing, and lighter weight (for fuel efficiency) at a reduced cost.

In Europe, the market for polyimides is dominated by wire enamels, where polyimides are used heavily in the automotive industry as for wire insulation and electromagnet windings in E-engine cars. The market is expected to grow somewhat as there will be greater use of E-engines in middle- and upper-class cars and as European auto production continues to grow.

In China, wire enamels and films and castings account for the bulk of demand. Use in wire enamels is expected to grow as demand for high-performance wire and cable will come from the booming growth of the Chinese high-speed rail network, city metro expansions, wind power, new energy plants, and communication industries across China.

The major US markets for polyimide molded parts are in bearings, bushings, seals, thrust washers, and valve seats for applications in jet engines, photocopying machines, computer printers, air compressors, and steam turbines. Polyimide molded parts compete for use with traditional materials such as ceramics and stainless steel.