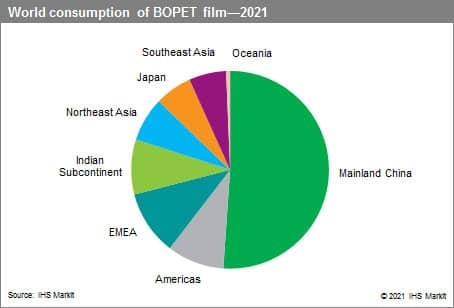 BOPET film is widely used in flexible packaging applications, thanks to its outstanding mechanical and physical properties such as high tensile strength, chemical and dimensional stability, heat resistance, transparency, gas and aroma barrier properties, and recyclability. Other important uses of BOPET film, are electrical/electronic applications, flat panel displays (FDPs), backsheets for solar panels, and various other industrial applications. These markets together account for over 95% of total global consumption. Polyester film consumption in traditional end-use markets such as magnetic media and photographic films declined significantly in the last few years because of new competing digital technologies. The use of polyester film for magnetic media applications has ceased in most regions.

High margins and steady consumption growth have attracted new investments and capacity additions during the past decade. During 2019–21, 1.3 million metric tons of new production capacity came on stream, primarily in mainland China. An estimated additional 540,000 metric tons per year of new capacity is expected until 2023. The new investments will occur primarily in mainland China/India but also in the EMEA region and in the United States. Therefore, the market is expected to remain oversupplied over the next few years, despite sustained growth in demand. In particular, urbanization and the improving lifestyle standards in developing countries will drive the demand for BOPET in flexible packaging. Demand for BOPET film in semiconductors (smartphones) and semiconductors (electric vehicles) is also expected to significantly increase. In contrast, consumption growth in FPDs will remain flat because of an ongoing display technology shift from LCD to OLED, with OLED requiring significantly less PET film compared with LCD.

IHS Markit’s Chemical Economics Handbook –Polyester Film is the comprehensive and trusted guide for anyone seeking information on this industry. This latest report details global and regional information, including

IHS Markit’s Chemical Economics Handbook –Polyester Film has been compiled using primary interviews with key suppliers and organizations, and leading representatives from the industry in combination with IHS Markit’s unparalleled access to upstream and downstream market intelligence and expert insights into industry dynamics, trade, and economics.