Polyacetal resins, also known as acetal or polyoxymethylene (POM) resins, are important engineering resins with exceptional wear resistance and excellent chemical, thermal, electrical, and mechanical properties; as a result, they have replaced metals and other plastics in wear-critical applications. While one of the oldest engineering thermoplastics, polyacetal resins continue to be successful substitutes in traditional metal markets, at costs that are lower than those of many other engineering thermoplastics. Polyacetal resins continue to replace die-cast zinc, brass, aluminum, steel, and other metals in various end-use applications. 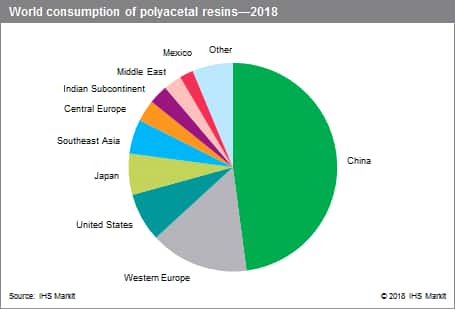 The electrical, automotive, and consumer appliance industries are the major end users of POM; together, they account for nearly three-fourths of the global consumption in 2018. Other uses include industrial applications, plumbing, sheets/rods/tubes, and medical products (pacemakers, artificial heart valves, etc.). Over the past few years, consumption of polyacetal resins has grown strongly, with the major growth coming from Asia, driven primarily by consumption in consumer articles/appliances, electrical, and automotive applications.

Over the last 10 years, China has become the largest producer and consumer of polyacetal resins, as the production of electrical/electronics goods has transitioned away from other countries in Asia (Japan, South Korea, and Taiwan). In 2018, Chinese consumption of POM accounts for nearly half of the global total. More than one-third of this consumption is for electrical/electronic parts in wear-sensitive applications, such as gears, push buttons, and switches in telephones, computer printers, and precision instruments, and demand in this market will continue to drive overall consumption in China. About one-fourth of Chinese consumption is for consumer articles and appliances, such as zippers, blenders, microwave ovens, and cigarette lighters. Many companies from Japan, Taiwan, and Hong Kong have set up ventures in China to produce consumer articles; more than half of the consumer products made from POM are exported. Consumption in automotive applications, the largest market in the developed world, is still relatively small in China.

Increased purchasing power will stimulate demand for automobiles, household appliances, medical goods, and consumer goods in the developing countries of Asia, South America, and Eastern Europe. Producers will continue to develop application-specific grades to meet the steadily growing requirements of the marketplace.