2-Ethylhexanol (2-EH) and n-butanol continue to account for most of plasticizer alcohol consumption, with a combined three-quarters of the global total. They are followed by isononyl alcohol and isobutanol. 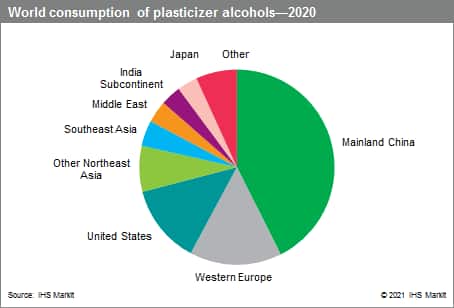 Asia, Europe, and North America are the largest markets for plasticizer alcohols, accounting for nearly 95% of world demand in 2020.

Global demand for n-butanol is a result of large demand in n-butyl acrylate, acetate, and glycol ethers production. World demand for 2-EH is still dependent on DEHP production, which will continue to grow because of demand for nonphthalate DOTP plasticizer production. In some regions, including the United States, Asia, and Western Europe, 2-EH consumption is also dependent on the production of 2-ethylhexyl acrylate.

IHS Markit’s Chemical Economics Handbook –Plasticizer Alcohols is the comprehensive and trusted guide for anyone seeking information on this industry. This latest report details global and regional information, including

IHS Markit’s Chemical Economics Handbook –Plasticizer Alcohols has been compiled using primary interviews with key suppliers and organizations, and leading representatives from the industry in combination with IHS Markit’s unparalleled access to upstream and downstream market intelligence and expert insights into industry dynamics, trade, and economics.