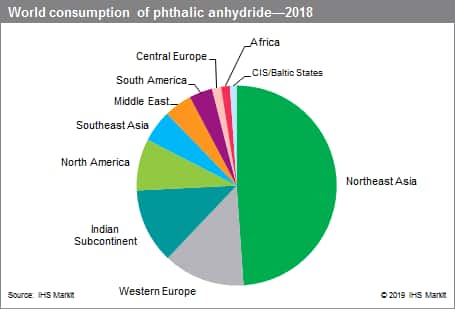 For plasticizers, Asia (China, India) and Western Europe will be the leaders in volume growth; a growing economy in Asia will result in higher domestic demand for phthalic anhydride. North American consumption of phthalic anhydride for plasticizers is forecast to decline modestly (0.4% per year) during the next five years. Environmental concerns and chemical replacement are the major causes for this lower consumption.

Consumption of phthalic anhydride in alkyd resins is expected to increase slightly for the next five years. Above-average growth is expected in Asia (particularly China), the Indian Subcontinent, and Southeast Asia, even though consumption is declining in Japan and South Korea.