Phosphoric acid (H3PO4) is the leading inorganic acid produced and consumed in terms of production value and it is the second largest in terms of volume—after sulfuric acid. By far its greatest use is in the manufacture of phosphate chemicals consumed primarily as carriers of phosphorus values in fertilizers. Use in the production of animal feeds is of secondary importance. Phosphoric acid is also used in the manufacture of phosphate chemicals for use in water treatment and detergent builders, dentifrices, fire control chemicals, and a host of smaller markets. Consumption of phosphoric acid for its acid properties is relatively small (e.g., treatment of metal surfaces, beverage acidulation). Phosphoric acid is the leading intermediate product or processing step between phosphate rock and the end markets for phosphorus in phosphate form.

The supply/demand balance for phosphoric acid is supply driven. If all the announced projects materialize, operating rates will improve. Emerging regions are heavily investing in downstream phosphate fertilizer production units. As a result, it is expected that older phosphoric acid production units in regions without indigenous phosphate rock reserves will come under additional pressure and will eventually be forced to close. 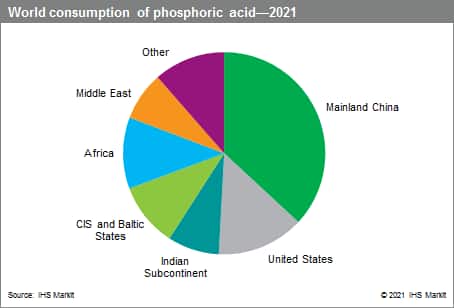 Since 2010, there have been several consolidations and capacity reductions in the United States. In Latin America, the first half of 2018 saw a reduction in demand for phosphate fertilizers because of lower food prices. In the second half, demand is expected to rise following increases in soybean prices.

While phosphoric acid markets in both Western and Central Europe are fairly mature, capacity has been significantly expanded in Eastern Europe during 2013–18. With phosphate reserves being exploited in Kazakhstan and Turkmenistan, new phosphoric acid plants were built in these two countries. A new plant is expected to come onstream by 2020 in Dorogobuzh, Russia.

In the Middle East and Africa, Office Cherifien des Phosphates (OCP) Group and Ma’aden Phosphate Company (MPC) are both shaping and shaking the global phosphoric acid industry. Both companies are backward integrated into indigenous phosphate rock deposits and both are heavily investing in developing and expanding downstream facilities. Through its majority owned subsidiary Waad Al Shamaal Phosphate Industrial Complex, Ma’aden expanded its phosphoric acid production capacity in Saudi Arabia in 2017, while OCP expanded its production capacity in Morocco during 2013–18, with further expansions planned through 2023. Additional large-scale capacity additions through the forecast period have been announced in Algeria, Egypt, and Uganda.

The global supply/demand balance is supply driven. Overall and on a global level, the phosphoric acid market is expected to grow annually by almost 4% per year.