Phosphorus is the second-most-widely used fertilizer nutrient, after nitrogen and before potassium, with phosphate rock being the most important source of phosphorus. Global production/consumption of phosphate rock is concentrated in mainland China, Africa, the United States, the CIS and Baltic States, and the Middle East.

World phosphate rock production decreased at 2.8% between 2016 and 2021. The large decline occurred in mainland China and the United States, while large growth occurred in Africa, the Middle East, and the CIS and Baltic States. Production from countries like Morocco, Saudi Arabia, Jordan, Russia, and Kazakhstan has increased considerably. Driven by downstream fertilizer production and consumption, especially in Africa, the Middle East, Central and South America, and the CIS and Baltic States, global phosphate rock production/consumption during 2021–26 is forecast to grow at an average annual rate of about 0.8%. 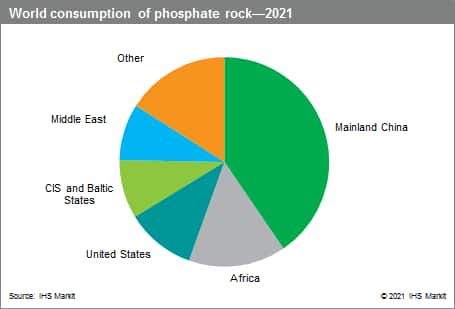 The primary market for phosphate rock is the production of phosphate fertilizer products such as ammonium phosphates and superphosphates. Phosphorus is essential for the development of roots in plants and assists in producing higher yields.

Mainland China is the largest consumer of phosphate rock, followed by Africa and the United States. The CIS and Baltic States and the Middle East are also large consumers. The largest increases since 2016 occurred in the Middle East, Africa, and the CIS and Baltic States, while significant declines occurred in mainland China and the United states.

IHS Markit’s Chemical Economics Handbook – Phosphate Rock is the comprehensive and trusted guide for anyone seeking information on this industry. This latest report details global and regional information, including

IHS Markit’s Chemical Economics Handbook – Phosphate Rock has been compiled using primary interviews with key suppliers and organizations, and leading representatives from the industry in combination with IHS Markit’s unparalleled access to upstream and downstream market intelligence and expert insights into industry dynamics, trade, and economics.