Most phosgene is consumed in the production of p,pʹ-methylene diphenyl diisocyanate (MDI) and “polymeric” MDI (PMPPI). The MDI is used in reaction injection-molding (RIM) systems, thermoplastic resins (TPUs), high-performance elastomers, and spandex fibers, as well as having some use in coatings, adhesives, and sealants. The PMMI is used primarily in the production of rigid polyurethane foams and its main applications are for building and industrial insulation and refrigeration. Consumption of phosgene for MDI/PMPPI accounted for 55% of total demand in 2017. The second-largest consumption category is for toluene diisocyanate (TDI), which is used to make flexible polyurethane foams, packaging, and textiles. It accounted for 26% of total phosgene demand in 2017. It is expected that demand will grow at a rate of approximately 3.5% during 2017–22. 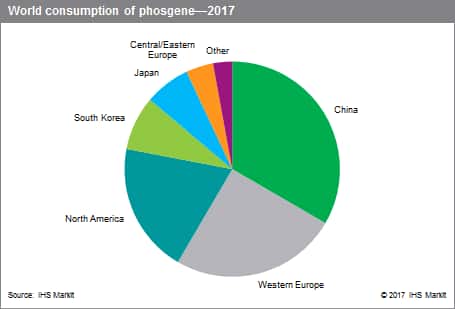 Demand for phosgene is generally driven by the global economy and its demand for end products such as automobiles, construction materials, packaging, electrical devices, appliances, and furniture. The use of phosgene technology in polycarbonate resin production is expected to decrease, as more advanced and safer technologies for the production and processing of phosgene and its derivatives are considered to be the trend in this industry.

China is the largest phosgene-producing and consuming country in the world, representing one-third of total demand in 2017. China is expected to be the main consumer of phosgene over the next five years and Chinese demand growth is expected to be about 4% for the next five years. Western Europe follows with approximately 25% of global phosgene production and demand in 2017; it is expected to have average demand growth of almost 3% for the next five years as a result of new capacity starting up and the expansion of specialty isocyanates such as hexamethylene diisocyanate (HDI), which is used in anticorrosive surface coatings for automobiles, aircraft, and trains. The Other Asia region is expected to have lower demand for HDI, because of the introduction of new phosgene derivatives in China and other Asian countries. Most Asian countries consume polycarbonate resin; however, because of the expected use of phosgene-free technology, consumption may decrease.

Since phosgene is generated at the plant in which it is consumed, phosgene is linked to the MDI, TDI, and polycarbonate resin–producing industries. Key findings and future implications for the phosgene market include the following: