Phenol-formaldehyde (PF) resins, commonly referred to as phenolic resins, are thermosetting plastics used in a variety of applications. They are noted for their high thermal resistance and strength, and also their fire-resistant properties. They are used primarily in forest products, and in molding, refractories, friction, abrasive, rubber processing, and other uses. 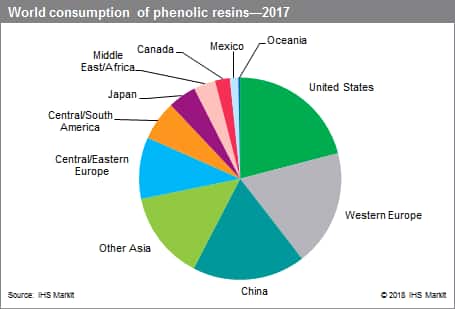 Phenolic resins are usually produced in batches. This permits a wide range of formulations and molecular weights to be manufactured using the same equipment. Continuous processes have been developed that are suitable for producing a large quantity of a single grade. However, these processes decrease plant product flexibility. In addition, there are no significant economic advantages over the batch process. For these reasons, continuous processes are generally not used commercially.

In most regions, consumption closely parallels production, since trade usually represents less than 10% of production in the producing countries. It is not usually cost-effective to transport most phenolic resins over long distances because of the product’s high water content. In most regions of the world, the largest markets for phenolic resins are in fibrous and granulated wood products such as oriented strandboard (OSB) and in softwood plywood. Demand for wood products is influenced by the health of the construction industry and overall state of the economy. Global PF resin consumption growth is greater in developing nations than it is in the more mature economies.

North America is the largest consuming region for PF resins, mainly because its production of OSB is higher than elsewhere in the world.

Wood adhesives will continue to have the largest market share and will drive phenolic resin consumption on a global scale. Use of PF resins for composite boards is highest in North America and South America, as producers of OSB and softwood plywood favor the use of PF over competitive adhesives like diphenyl methylene diisocyanate– (MDI-) based ureaformaldehyde (UF) or melamine-urea-formaldehyde- (MUF-) based resins. In Europe, producers of plywood favor PF, but OSB is made primarily with MDI-based adhesives. In most parts of Asia, there has been little production of OSB, but high production of hardwood plywood, which is generally made with UF or MUF.