In the petrochemical industry, the organic chemicals produced in the largest volumes are methanol, ethylene, propylene, butadiene, benzene, toluene, and xylenes. Ethylene, propylene, and butadiene, along with butylenes, are collectively called olefins, which belong to a class of unsaturated aliphatic hydrocarbons having the general formula CnH2n. Olefins contain one or more double bonds, which make them chemically reactive. Benzene, toluene, and xylenes, commonly referred to as aromatics, are unsaturated cyclic hydrocarbons containing one or more rings. Olefins, aromatics, and methanol are precursors to a variety of chemical products and are generally referred to as primary petrochemicals. Given the number of organic chemicals and the variety and multitude of ways by which they are converted to consumer and industrial products, this report focuses primarily on these seven petrochemicals, their feedstock sources, and their end uses.

The following charts present the consumption of primary petrochemicals by type and by region: 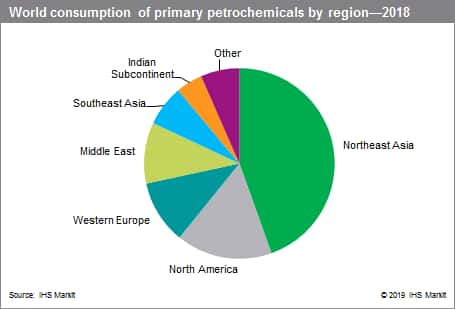 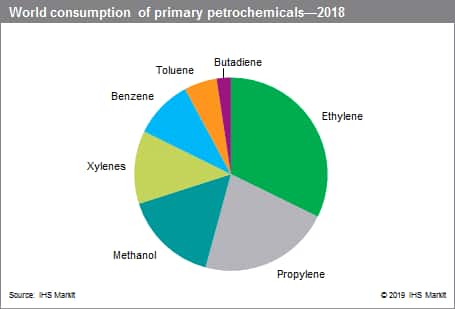 Basic chemicals and plastics are the key building blocks for manufacture of a wide variety of durable and nondurable consumer goods. Considering the items encountered every day—the clothes we wear, construction materials used to build our homes and offices, a variety of household appliances and electronic equipment, packaging for food and beverages, and many products used in various modes of transportation—chemical and plastic materials provide the fundamental building blocks that enable the manufacture of the vast majority of these goods. Demand for chemicals and plastics is driven by global economic conditions, which are directly linked to demand for consumer goods.

While investments in new chemical assets are occurring on a global basis, the primary focus over the past decade has been in China, the Middle East, and North America, each with its own unique drivers for these investments, including fast - developing markets and indigenous energy and feedstock advantages. China’s investment has been focused on coal-tochemicals production and on-purpose propylene processes, but growth has slowed with the recent implementation of environmental controls, especially for coal-based chemicals. The Middle East, originally focused on oil and gas exports, began to develop its petrochemical assets to capitalize on its cheap and readily available ethane; the units are generally large scale, relatively new, and forward integrated into derivatives, the output of which is primarily for export. The developments in North American nonconventional oil and gas markets have reignited investment in new petrochemical capacity after more than a decade of very limited activity. Recent shale gas discoveries in the United States and Canada have dramatically increased the supply of natural gas liquids, which has transformed North America into a low-cost region for chemicals production once again. A large number of global chemical companies are now expanding or building facilities in the region.

The petrochemical industry continues to be impacted by the globalization and integration of the world economy. Several factors influencing world petrochemicals are the following:

There are overlaps among these trends and the impact varies by petrochemical product, country/region, and magnitude. Detailed discussion of individual primary petrochemical feedstocks, intermediates, derivatives, and end-use market segments is available in other CEH reports. The various CEH reports on each petrochemical provide in-depth coverage and a definitive source of market information for these chemicals.