Fossil fuels (coal, crude oil or petroleum, natural gas liquids, and natural gas) are the primary sources of basic petrochemicals but only about 9–10% of the global fossil fuel production is ultimately used as a petrochemical feedstock; their primary usage remains the production of energy. As such, petrochemical feedstock supply and pricing are heavily influenced by fluctuations in world energy markets. The petrochemical industry typically produces a range of small-sized molecules by subjecting a selected feedstock to a set of chemical reactions. The produced molecules are part of the organic chemistry spectrum as they contain carbon atoms; the sole exception is ammonia, which is produced from natural gas but does not contain any carbon.

This report presents an overview of the world petrochemical feedstock demand situation for natural gas, natural gas liquids (NGLs), petroleum liquid feedstocks (naphtha and gas oil), and coal. NGLs include ethane, propane, butanes, and pentanes plus (C5+), also known as natural gasoline. The choice of feedstock(s) used by a petrochemical unit is a key determinant for the overall economics of production and is therefore, critical; raw material cost is a major component in the overall cost of production of petrochemical producers. 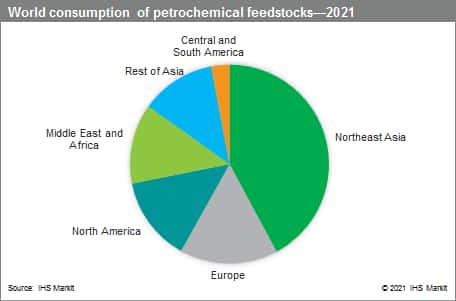 Each region has developed its own feedstock specificities depending on the resource and technology available and the characteristics of the domestic markets and environmental standards of the region. In 2021, naphtha remains the largest-volume petrochemical feedstock used globally, followed by natural gas, coal, and ethane. The largest consumers of petrochemical feedstocks are Northeast Asia (largely mainland China), North America (mostly the United States), the Middle East, the CIS and Baltic States, and Western Europe.

Over the past decade, the use of ethane has gained momentum because of the development of new light-fed steam cracking capacity in the Middle East and North America (shale boom). The use of coal for the production of chemicals has also increased over the last decade, driven by the rapid development of the coal chemical industry in mainland China, which has capitalized on its abundant coal reserves to reduce its external dependency on both energy and chemical feedstocks. While the world’s new requirements for fuels is slowing down gradually, new technologies are being developed to redesign the overall refinery product slate. New pollution control measures are also modifying mainland China’s coal-to-chemicals strategy. The report analyzes regional trends and changes currently affecting the wider petrochemical industry, including the impact of the COVID-19 pandemic.

IHS Markit’s Chemical Economics Handbook – Petrochemical Feedstocks is the comprehensive and trusted guide for anyone seeking information on this industry. This latest report details global and regional information, including

IHS Markit’s Chemical Economics Handbook – Petrochemical Feedstocks has been compiled using primary interviews with key suppliers and organizations, and leading representatives from the industry in combination with IHS Markit’s unparalleled access to upstream and downstream market intelligence and expert insights into industry dynamics, trade, and economics.