Polyethylene terephthalate, commonly referred to as PET or simply polyester, is the common chemical name for the polymer used to make products such as polyester fibers, film, and solid-state (bottle) resin. This report focuses primarily on the supply/demand picture for the captive consumption of polyester melt (continuous polycondensation) and therefore does not include any detailed information about polyester production from virgin PET chips and/or recycled PET.

The PET polymer producer landscape is fragmented, with hundreds of producers globally, but some market participants span the entire polyester value chain from the production of upstream monomers (ethylene oxide, ethylene glycol, purified terephthalic acid, or dimethyl terephthalate) all the way to the production of polyester fibers and solid-state resins. The majority of PET polymer capacity, production, and consumption is now located in Asia, with China representing over half of the global total in 2017. 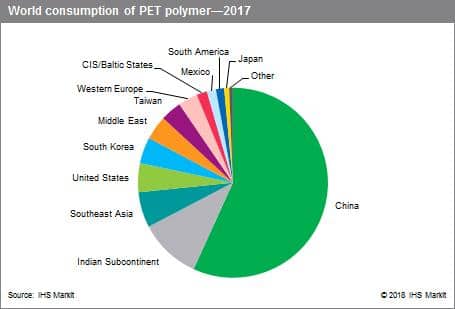 In 2017, about 80% of global PET polymer capacity was based in Asia; as a result, most of the largest global producers are headquartered in Asia. Indorama Ventures of Thailand remains the global industry leader, with significant investments in the United States, Mexico, and Europe, as well as throughout Asia. A certain amount of capacity rationalization has been seen in mature markets such as Western Europe and Japan; however, the resulting losses have been more than offset by the significant new production capacity commissioned in other regions, especially in China, India, and the Middle East.

Global consumption of PET polymer has developed at a sustained average rate of more than 4% per year over the last 10 years, led by growth in Asia. The major drivers have been the fast development of polyester fiber (textile filament, industrial filament, staple), and the growing use of PET solid-state resin for packaging applications, especially in the beverage sector. In mature markets such as North America and Western Europe, stagnating or even declining consumption of PET polymer has been seen over the past five years, mainly the result of increasing polyester product imports from cost-advantaged producers in the Middle East and Asia.

The largest market for PET polymer is the production of polyester fibers, which have grown to account for half of the total (natural and synthetic) fiber market globally. With its competitive manpower costs, Asia (Northeast Asia, Southeast Asia, and the Indian Subcontinent) has become the focal point for the global textile industry, and many investments have been made upstream in the polyester chain and downstream into the textile industry. The fast-growing Asian textile industry has been consuming increasing amounts of fiber in the textile weaving, dyeing, and apparel making industries. In addition, the abolition of the MultiFibre Agreement (MFA) during the mid-2000s has contributed to the further advancement of Asia as the textile and fiber manufacturing center and export leader.

PET solid-state resin is the second-largest market for PET polymer, accounting for nearly 30% of global demand. Over the past two decades, demand for PET solid-state resin has been driven by the substitution of heavy-walled glass containers used in the beverage industry. The combination of good physical, optical, and lightweight properties has allowed PET solidstate resin to gradually replace glass bottles and containers, and it remains the material of choice for this application. As most of the glass substitution in the packaging segment has already taken place globally, PET solid-state resin consumption is now driven primarily by the general growth seen in the beverage industry. As such, emerging regions will be the primary growth drivers for solid-state resin, as the improving living standards and changing lifestyles are driving increased consumption of bottled beverages. As a result, PET polymer consumption growth for the production of PET resin will slow to about 3–4% per year over the forecast period, down from the double-digit rates seen in the 1990s and early 2000s.

Future growth in PET polymer consumption will continue to be driven by the two largest end-use segments, textile filament and solid-state resin, driven by further investments into new polyester fiber capacity in Asia as well as growing beverage markets in the emerging world. While the highest average annual growth rates, on a percentage basis, are projected for the CIS and Baltic States, Africa, and the Middle East, the impact on total consumption of PET polymer will remain relatively minor as a result of the small size of these markets. Northeast Asia is expected to account for most of the PET polymer demand growth through 2022.