para-Xylene (PX) is an aromatic compound that is commonly derived from crude oil sources and extracted from the mixed xylenes stream. PX is the most widely used of the three xylene isomers (the two others being ortho-xylene and metaxylene). In 2018, PX accounted for more than 85% of the global mixed xylene demand. The major source of isolated PX is refinery reformers; however, a significant amount of para-xylene is left in the reformate stream and sent to the gasoline pool for octane value enhancement. High-octane gasoline is the most important use of reformate, competing with use for isolation of xylenes/para-xylene; therefore, consumption of high-octane gasoline has a key influence on para-xylene markets globally. 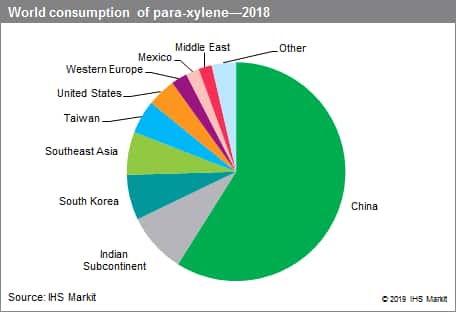 PX is a key raw material used in the production of purified terephthalic acid (PTA) and dimethyl terephthalate (DMT), which are used almost exclusively in the production of polyethylene terephthalate (PET) polymer for the production of polyester fibers, PET solid-state resins, and PET film. Over the past three decades, global PX demand has been driven by the extensive development of the polyester chain, which has taken place largely in Northeast Asia. The development of the Northeast Asian polyester industry has been driven primarily by the significant advancement of the regional textile industry, especially in China. Production of polyester fibers is more labor intensive than traditional and heavily automated petrochemical manufacturing processes, and their production has developed rapidly where manpower costs were the most competitive and where the downstream textile industry was flourishing. Therefore, PX consumption has remained heavily dominated by Northeast Asia.

In China, the significant development of the polyester chain has prompted the upstream development of PTA production units. As a result, Chinese PX consumption has increased at double-digit rates over the last decade. While China has managed to back-integrate its world-scale polyester production into PTA, the shortage of heavy naphtha available for reforming in the country and public resistance to the construction of PX plants because of safety concerns have limited the further upstream integration of PX supply. As a result, Chinese PX demand has been supplied primarily by imports from other Northeast Asian countries (South Korea, Japan, and Taiwan), as well as the Middle East and Southeast Asia. In 2018, over 60% of Chinese PX demand was supplied by imports. As a result of these Chinese requirements, para-xylene has been the subject of significant international trade; in 2018, almost half of global PX production was ultimately exported.

In 2018, three-fourths of the global capacity for PX was located in Asia (Northeast Asia, the Indian Subcontinent, and Southeast Asia). Since 2012, PX capacity has expanded at a sustained average rate of about 5% per year, driven by new plant start-ups in Asia. The largest PX producers typically operate world-scale facilities that can produce between 1.0 million and 2.0 million metric tons of PX on an annual basis. Most are international oil companies and national oil companies, or large refiners and petrochemical producers. In 2018, the world’s largest PX producers were Reliance Industries, SINOPEC, and ExxonMobil.

China and South Korea are the two largest producers of PX, but these two countries have pursued different marketing strategies. In China, PX production capacities are ultimately meant to supply domestic PTA/PET polymer producers, while in South Korea, the indigenous PX capacity primarily serves the export market. In 2018, the next-largest para-xylene producing regions were the Indian Subcontinent, Southeast Asia, and the Middle East.

Over the next five years, the pace of PX capacity expansion is projected to accelerate, spurred by China’s numerous megarefining and petrochemical projects. New capacity will also be added in the Middle East (Saudi Arabia) and Southeast Asia (Brunei, Vietnam), with a view to exporting their production to China; however, as China improves its self-sufficiency, PX trade is expected to contract, which will lengthen the PX market globally. By 2023, the Middle East is projected to become the third-largest producing region owing to the further development of its cost-competitive PX industry; local feedstock integration, large-scale production facilities, and low energy costs have enabled the region to become one of the most cost-competitive globally.

PX consumption will continue to grow strongly, driven by growing production of polyester fibers and PET solid-state resin; ultimately, the polyester value chain will benefit from the increasing world population, changing lifestyles, and improvement in living standards, as well as the further economic development of emerging regions. Despite positive growth prospects for PX demand, the world average operating rate is forecast to drop sharply because of the onslaught of new Chinese capacity scheduled to come onstream during the forecast period.