The oxo process or hydroformylation of olefins with synthesis gas is the principal route to C3-C15 aldehydes, which are converted to alcohols, acids, or other derivatives. By far the most important oxo chemical is nbutyraldehyde, followed by C6-C13 aldehydes for plasticizer alcohols, isobutyraldehyde, propionaldehyde, valeraldehyde, and C12-C18 aldehydes for detergent alcohols. 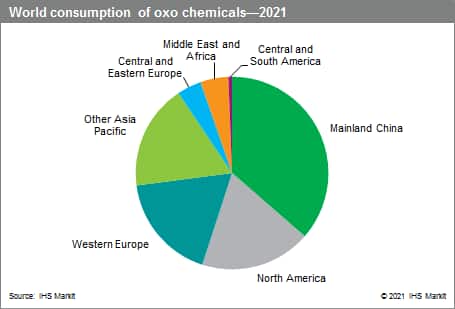 By far, most oxo aldehydes are hydrogenated to alcohols. The large majority of the world consumption of nbutyraldehyde is converted to 2-EH and n-butanol, while all of the detergent and C7-C13 plasticizer oxo aldehydes are converted to their corresponding alcohols. Other oxo chemicals, including propionaldehyde, valeraldehyde, and isobutyraldehyde, have more varied applications. As a result, demand for oxo chemicals is strongly dependent on demand for C4-C13 plasticizer alcohols. Consumption of plasticizer alcohols, especially C7-C13 alcohols, depends greatly on demand for plasticizers and flexible PVC. Growth in the world consumption of plasticizer alcohols for plasticizers is forecast at 3.2% annually during the next few years. Solvent/coating applications are the largest end use for C4-C5 alcohols; this includes direct solvent use and derivative solvent use, mainly as acetates, glycol ethers, and acrylates.

Other plasticizer alcohols such as isononyl alcohol (INA) and 2-propylheptanol (2-PH) will also continue to grow as plasticizers derived from these alcohols (such as hydrogenated phthalates, DINP, and DPHP) will compete and substitute with traditional plasticizers. 2-PH is derived from valeraldehyde.

Overall, world consumption of oxo chemicals will grow at an average annual rate of just over 3%.

IHS Markit’s Chemical Economics Handbook – Oxo Chemicals is the comprehensive and trusted guide for anyone seeking information on this industry. This latest report details global and regional information, including

IHS Markit’s Chemical Economics Handbook – Oxo Chemicals has been compiled using primary interviews with key suppliers and organizations, and leading representatives from the industry in combination with IHS Markit’s unparalleled access to upstream and downstream market intelligence and expert insights into industry dynamics, trade, and economics.