ortho-Xylene (1,2-dimethyl-benzene, o-xylene, or OX) is an aromatic compound that is commonly derived from crude oil sources. It is found in the mixed xylenes stream, which is a mixture of ortho-xylene, meta-xylene (MX), and para-xylene (PX). While very similar in structure, these three isomers have very different chemical properties and applications. OX is the second-most-consumed component obtained from the mixed xylenes stream, after PX; in 2017, OX accounted for less than 6% of the global mixed xylenes demand. 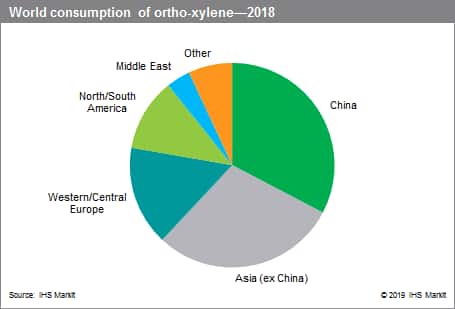 Over the past two decades, OX capacity has increased by about 2% per year, but since 2014 has declined by 3% per year,owing to a feedstock shift in the production of phthalic anhydride (PA), the major end use of ortho-xylene. The 10 largest OX producers, many of which are in Asia, accounted for about 70% of total capacity globally in 2018; the OX market is therefore relatively concentrated. Most of these producers are international oil companies, national oil companies, or large refiners and petrochemical producers. In 2018, the world’s largest OX producers were Sinopec, ExxonMobil, and Formosa.

Isolated ortho-xylene is used primarily to manufacture PA (accounting for more than 90% in 2018), a key component in the manufacture of plasticizers; PA can also be produced from naphthalene in some regions. PA is used primarily to produce phthalate-based PVC plasticizers, unsaturated polyester resins used for fiber-reinforced resins, and alkyd resins used for coatings. Over the past five years, global OX consumption has declined at an average of 4.2% per year, driven down by the increasing use of naphthalene as a phthalic anhydride feedstock in China, as well as the overall stagnant demand for PA globally. Ultimately, increasingly stringent regulations, such as the REACH regulation in the European Union, are calling for the gradual replacement of phthalate-based plasticizers, which is limiting PA—and thus OX—consumption growth. In developed regions, where regulations are more stringent, OX demand has declined over the past five years; in emerging countries, where construction and consumer markets are still growing, PA demand is still broadly increasing, but this has not necessarily led to higher OX demand. Since 2014, some Asian PA manufacturing units have stopped consuming ortho-xylene, preferring to use naphthalene as its feedstock, leading to the idling of OX capacity in Northeast Asia.

Over the past five years, while some consolidations have been seen within the OX industry, global operating rates have declined below 60%, as consumption has declined more rapidly than capacity. Over the next five years, global OX capacity is projected to increase minimally, following the restart of the former Tenglong (Dragon) Aromatics (Zhangzhou) Co. unit (now owned by Fujian Fuhaichuang) in late 2018. Even with rising Chinese OX production, Chinese OX imports will increase at a faster pace to keep up with consumption growth. ortho-Xylene trade is relatively limited globally, amounting to about 25–30% of global consumption in recent years. China is, by far, the major recipient of imports, while the major OX exporters in 2018 were the Indian Subcontinent, Southeast Asia, and other Northeast Asian countries (Japan, South Korea, and Taiwan).

In the developed world, OX and PA markets are believed to have stabilized and are projected to post slow growth through 2023. Stricter environmental regulations in China are projected to limit the growth of PA produced from naphthalene over the coming years. Softer growth prospects for the Chinese steel industry will limit the amount of new naphthalene volumes available, which will prevent the further replacement of OX-based PA units in the country. Overall, global OX demand is projected to increase at an average rate of 2–3% per year through 2023.