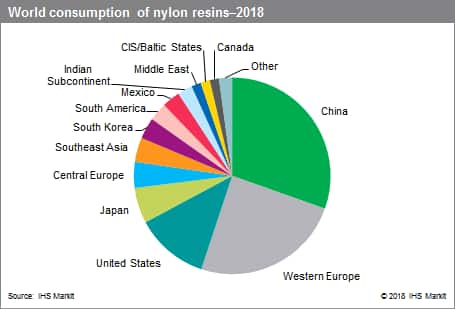 China is the major producer and consumer of nylon 6 and the third-largest producer and consumer of nylon 66; however, consumption is still largely for nylon fibers. By 2023, China will account for more than half of total global nylon capacity and about one-third of nylon resin consumption. China will also account for nearly 99% of the total global capacity increase expected during the forecast period. China is a strong producer of nylon 6, and its strength in this market will be compounded in the next five years, driven by its fiber market. This growth will impact other regions or countries, particularly with imports of nylon 6 resin declining as China moves toward increased self-sufficiency.

As nylon producing regions, North America and Western Europe are expected to remain, at best, stable. Both are important nylon resin consumers, but both regions are growing at below-average rates.

The Middle East, a major chemical producer, is not yet a major player in the nylon market; its global share of nylon capacity was only about 2% in 2018. Currently, little nylon 6 is produced in the Middle East, as the region prefers to produce and export caprolactam to China instead. Saudi Polymers, the first nylon 66 producer in Saudi Arabia, became operational in mid-2016, with most of the output exported.

Automotive uses are the largest application for nylon resins, accounting for more than one-third of the nylon resin consumed in 2018. This market is expected to grow in parallel with the forecast growth of automobile production. The largest vehicle-producing region, Northeast Asia, is expected to drive this growth. Applications include a wide variety of interior and exterior hardware and under-the-hood parts that require heat resistance, strength, and good aesthetic appearance. Automotive applications generally require the properties of nylon compounds, which include fiberglass and/or mineral reinforcements, heat stabilizers, and impact modifiers.

Further growth in automobile production is likely to support the continued geographic shift in OEM production, thermoplastic compounding, and molding operations, because the manufacture of bulky finished components tends to remain close to the assembly point.

Film and coatings are the second-largest market for nylon resins in 2018. The primary applications are in flexible packaging for meat and cheese. The film products for these foods require high barrier properties. Nylon is coextruded or laminated with a layer of oxygen barrier material. Other smaller applications with above-average growth for nylon resins include electrical/electronic and appliances.

Nylon 6 has somewhat lower heat resistance than nylon 66 but has advantages in aesthetics (especially in reinforced compounds), easier colorability, and historically lower cost. In practice, there is significant overlap in the performance of these two major nylon types. While the preference for 6 versus 66 varies by region, nylon 6 continues to hold the largest volume share of engineering plastic nylon resin globally by virtue of its broad use in the production of film used in packaging.

Bio-based nylons are similar in properties to conventional nylon, except they are produced using specialty bio-based monomers, rather than the conventional petroleum-derived monomers. They are gaining interest in the industry because they offer potential cost savings, and production of the monomers allows reduced greenhouse gas emissions. Bio-based nylon resins are expected to be drop-in replacements for conventional nylons used in manufacturing an array of consumer goods, in medical applications, etc. The success of bio-based nylons versus conventionally produced nylons depends on the price competiveness, economics of the raw materials, and production processes.