Nonwovens are generally categorized by their use in either disposable (hygiene products such as baby diapers, adult incontinence products, and feminine hygiene products, as well as use in wipes, medical/surgical products, filtration products, and other uses such as industrial garments) or durable (geotextiles, building/construction, automotive parts, furnishings/bedding, and other uses such as apparel interlinings) applications. Disposable applications (led by hygiene products, wipes, and medical/surgical products) account for the majority of nonwovens use with 59% of the total; durable applications (led by geotextiles/construction, automotive parts, and furnishings/bedding) make up 41% of total nonwovens consumption. 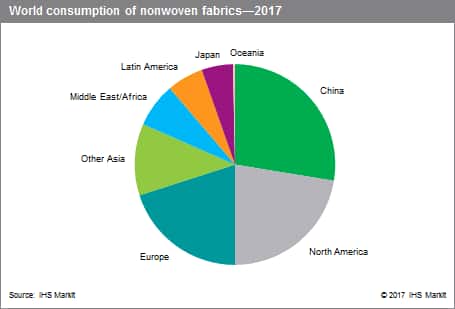 The market is concentrated in three regions; Asia, Europe, and North America account for approximately 87% of world consumption in 2017, down from 84% in 2012. Demand growth during 2017–22 will be the highest in Other Asia, China, and the Middle East/Africa. The relatively stronger growth in these markets will be tempered by modest growth in North America and Europe, largely because of market saturation and product maturation, and in Latin America, where economic recovery is expected.

China is the largest single participant in the global nonwoven fabrics market, accounting for nearly 28% of consumption, 34% of production, and 35% of exports in 2017. This trend is expected to continue during 2017–22, as growth in Chinese consumption will result in the commissioning of additional capacity and increased production. China is forecast to experience the largest volume increases in nonwoven fabrics consumption during 2017–22.

North America and Europe are the second- and third-largest nonwoven fabrics markets, accounting for 22% and 20%, respectively, of world consumption in 2017. The rest of Asia (excluding China) makes up nearly 17% of global consumption.

In Other Asia (excluding China and Japan), strong nonwovens growth is expected because of increasing demand in packaging, home furnishings, medical, hygiene, apparel, and other industrial applications. Japan will experience moderate growth as a result of high demand for medical and hygiene products (which are exported to Asian countries).

Consumption growth in the Middle East and Africa, expected to be about 5.5% annually on average, is driven by hygiene, medical, and wipes applications. In Latin America, in particular South America, economic recovery will support modest nonwovens growth.

Consumption growth is higher in disposable (short-life) applications; increasing birth rates and aging populations will lead to increased use in hygiene applications and continued strong demand for disposable medical/surgical products and wipes, especially in developing markets.

There is an increasing trend to produce nonwoven fabrics from renewable or recycled sources because of consumer demand.