Isodecyl accounts for more than 50% of global demand for nonene, with Exxon being the dominant player. Other important applications include nonylphenol and neodecanoic acid. Future growth is highly dependent on the markets in these core applications. Production of nonylphenol will show some growth only in geographical areas where cost-effectiveness is the primary objective and the use of nonylphenolethoxylates (NPEs) is not restricted. China and India are the key players for nonylphenol owing to the use of NPEs in their large textile industries. This situation could change if some form of legislation is introduced.

North America is the largest producer of propylene tetramer, followed by Europe. There is no production in Asia and the region needs to import tetramer from North America and Europe. Dodecylphenol represents the largest end use. Dodecylphenol is converted into its calcium, magnesium, or barium salt (phenate) for use as a detergent in lubricating oils This end use has grown significantly in Other Asia over the past three years. This has driven North American production for export into Asia during the past few three years. Over the forecast period, this trend is expected to continue, but the growth rate will likely slow down. The North American and Western European markets for tetramer-based lubricating oil additives are flat, but there will likely be continued growth in the export market for formulated lube oil additive packages containing detergents based on dodecylphenol produced in these regions.

Consumption for dodecylbenzene (DDB) will continue to decrease in most regions. DDB is the precursor of dodedecylbenzene sulfonates (i.e., branched alkylbenzene sulfonates, also known as BAS). The latter product is used as a surfactant in household detergents in lessdeveloped countries. BAS is very slow to biodegrade and is increasingly being displaced by other surfactants that have better biodegradability. 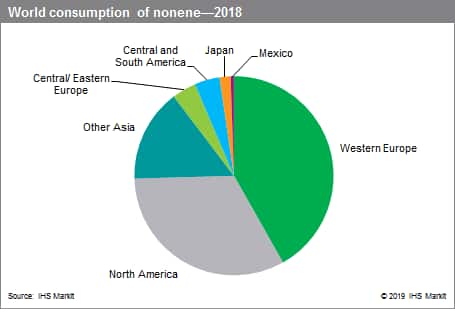 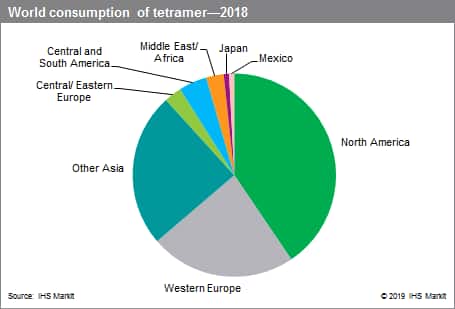 Nonene and tetramer are branched olefins produced by the polymerization of propylene. 1-Dodecene, a linear alpha-olefin produced from ethylene, is not included in this report. Nonene is also referred to as propylene trimer; the former is the more commonly accepted name. Tetramer is also referred to as propylene tetramer or branched dodecene. Once manufactured primarily as components of polymer gasoline, these products are now valued primarily for chemical use.

Neither nonene nor tetramer has been extensively tested for health, safety, and environmental problems, since they are used predominantly as chemical intermediates. However, in 2010 they have been registered under REACH. As chemical intermediates they are allowed to be used in controlled environments. However, it is known that both are mildly toxic when inhaled or ingested. Also, when heated to decomposition, both emit an acrid smoke and irritating fumes. Several downstream products of nonene and tetramer have been affected by environmental and toxicology concerns.