Nitrobenzene is the primary raw material for the production of aniline, which in turn is used in the production of methylene diphenyl diisocyanate (MDI). Consumption of nitrobenzene for aniline accounts for 100% of global nitrobenzene consumption; therefore, supply/demand in the nitrobenzene market is closely tied to demand for aniline for MDI manufacture. MDI is consumed along with propylene oxide polyols in polyurethane (PU) foams. These are mostly rigid foams and are used in construction and appliances. As a result, consumption of MDI, as well as aniline and ultimately nitrobenzene, largely follows the patterns of the leading world economies and depends heavily on construction/remodeling activity (residential and nonresidential), automotive production, and original equipment manufacture (OEM). Consumption of nitrobenzene for aniline is expected to grow at an average annual rate of about 5%, reflecting the expected growth rate for consumption of MDI. 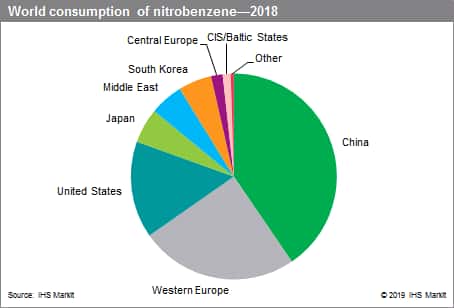 Currently, over three-quarters of world nitrobenzene capacity is located in Northeast Asia and Western Europe. Because a large percentage of nitrobenzene manufacture is associated with integrated aniline capacity for manufacture of MDI, the world’s largest nitrobenzene producers are therefore large MDI producers, such as Wanhua, BASF, Covestro (formerly Bayer), TOSOH, and Huntsman.

Together, Wanhua Chemical, BASF, Covestro, Huntsman Group, and Connell Chemical accounted for 56% of the world capacity for nitrobenzene. Expansions by BASF, Covestro, and Wanhua are expected during the forecast period.

The Indian Subcontinent and Central Europe are expected to see the largest increases in demand for nitrobenzene, with average annual growth rates of almost 24% and 12.5%, respectively, during the forecast period to 2023.

Demand in Northeast Asia (driven by China) and North America (driven by the United States) will also increase at a healthy pace, with growth rates higher than 5% during 2018–23.