World nitric acid consumption has increased steadily since 2000. The largest market for nitric acid is the production of ammonium nitrate (AN) and calcium ammonium nitrate (CAN), accounting for almost 77% of the total world consumption of nitric acid in 2020. The major end use for AN fertilizer is in decline because of concerns about nitrate groundwater contamination and security issues. As a result, AN fertilizer is being increasingly substituted by solid urea, which has a higher nitrogen content (46%) than AN (34%), is less costly, and is less dangerous. 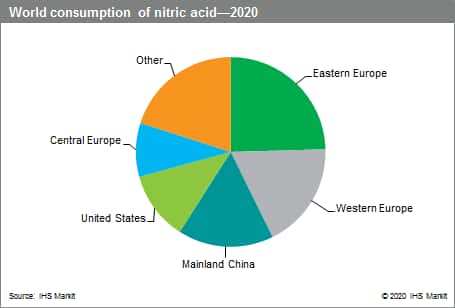 Nitric acid is one of the world’s largest commodity chemicals. It is used predominantly as an intermediate for fertilizer production (primarily ammonium and calcium ammonium nitrate) and for the production of nitro-containing organic intermediates. In 2020, nearly 80% of nitric acid was used for fertilizer products, with the remainder used in industrial applications. The largest chemical end uses for nitric acid include nitrobenzene, adipic acid, toluene diisocyanate (TDI), and nitrochlorobenzenes. Other important end uses include the production of explosives, metal treatment, and uranium processing.

Consumption of AN in explosives and blasting agent applications continues to grow, but is much more regulated since 11 September 2001. Other nitric acid–based products such as nitrophosphates and potassium nitrates are also used in fertilizer applications.

Most nitric acid is consumed captively, and the merchant portion of the market accounts for less than 10% of the total. International trade is minor and has little impact on the nitric acid balance. The world average operating rate has been at the high 70% level in the last 10 years, indicating a relatively healthy market balance.

The nitric acid market is dominated by fertilizer-producing companies such as Yara and CF Industries. On a global level, the market is fairly fragmented, with the top producer owning just over 10% of total installed production capacity. The top 10 producers account for about 36% of global production capacity. However, in certain regions (e.g., Western Europe and Japan), the regional share by leading companies can exceed 30%.

Europe, North America, and mainland China dominate the market statistics. Together, these regions account for more than 80% of global supply and demand. Since 2000, the largest increases in capacity, production, and consumption have occurred in mainland China.

IHS Markit’s Chemical Economics Handbook –Nitric Acid is the comprehensive and trusted guide for anyone seeking information on this industry. This latest report details global and regional information, including