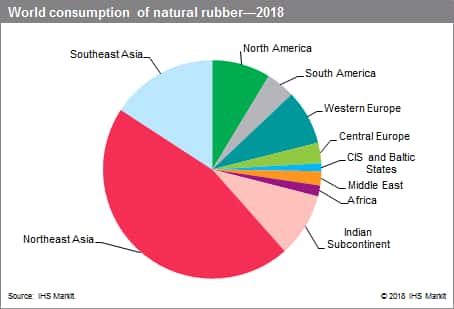 A significant majority of natural rubber production comes from small farmers that are not able to reduce production when prices fall to try to tighten supply and push prices higher. As a result, falling price trends draw strength from rising inventories, making the situation that much worse for producers.

Natural rubber is a naturally occurring elastomeric polymer of isoprene (2-methyl-1,3-butadiene) with excellent resistance to abrasion, impact, tears, and heat buildup caused by hysteresis. It is also characterized by very good tensile strength, green strength, resilience, flexibility, aging stability, and building tack. However, natural rubber is not very resistant to oxidation, ozone, weathering, and a wide range of chemicals and solvents. Thousands of species of trees, plants, shrubs, and vines produce natural rubber latex in the world.

Although natural rubber can be isolated from nearly 2,000 species of trees, plants, shrubs, or vines of the tropical and temperate regions, one source—the tree Hevea brasiliensis—provides essentially all (99.5%) of the world’s natural rubber. Hevea rubber is produced in tropical areas of the world including the equatorial areas of Southeast Asia, Africa, and Central and South America, but not in the United States, Japan, or Europe because of unsuitable climatic/weather conditions. A small commercial source of natural rubber, the guayule shrub, Parthenium argentatum, has been of interest because guayule rubber can be produced in hot, arid areas, such as the southwestern region of the United States.

Because of natural rubber’s large consumption volume, the limited area of commercial production, and its importance to the world today, the management of its supply is of dire importance. This includes two major areas—stabilizing the current supply of natural rubber and developing diversified sources of natural rubber.

World consumption of natural rubber is forecast to grow at an average annual rate of about 3%.