For environmental reasons, natural gas is thought of as the stepping stone between fossil fuels such as coal and oil, and renewable energy such as water, wind, and solar power. Much of this gas will come from nonconventional sources, primarily horizontal drilling and hydraulic fracturing of shale formations. The combustion of natural gas emits about 30% less carbon dioxide (CO2) than oil, and about 45% less CO2 than coal. Over the last decade, consumption of shale-based natural gas has reduced about 1.5 billion barrels oil equivalent per day of carbon dioxide, which is equal to that saved by the use of solar and wind power combined over the same period. Therefore, natural gas is increasingly thought of as an ideal fossil fuel, as a long-term bridge to newer but slower-growing consumption of nonfossil “renewable” sources such as solar and wind power. 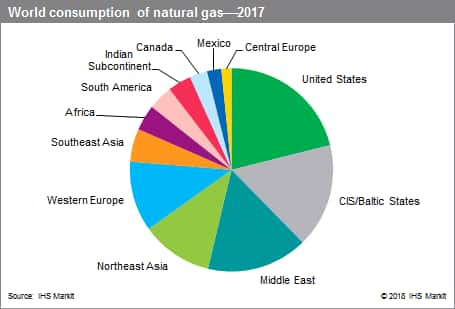 Natural gas reserves are estimated at 6,895 trillion cubic feet in 2017. Reserves are forecast to remain relatively stable, as natural gas consumption growth is expected to be matched by natural gas discovery. Much of the future growth is forecast to come from horizontal drilling and hydraulic shale fracturing applications, most of which are currently in the United States, but will likely grow from other regions as well. This technology has allowed the profitable production of natural gas (and oil) from previously considered low-permeability geologic formations. Other regions, such as China and Russia, have large estimated shale gas reserves associated with nonconventional sources and should at some point begin to develop these.

World consumption of natural gas is mainly for power and industrial uses, followed by residential/commercial and transportation. All sectors are forecast to increase moderately during the forecast period.

US natural gas consumption continues to increase moderately, led by industrial and power applications. Industrial uses include pipeline, lease, and fuel applications. Power includes use in electricity generation. Other applications for natural gas include residential and commercial (heating fuel), and transportation (vehicle use).

In the Middle East, natural gas consumption has been growing strongly, and will continue to grow moderately through the forecast. The leading applications for natural gas are power and industrial.

Consumption of natural gas is forecast to increase in all regions except Western Europe, where it is forecast to experience only a very slight decline.