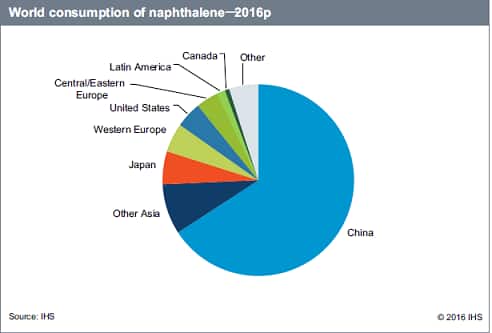 Increased environmental pressure placed on naphthalene use in pesticides, dyestuff intermediates, and solvent applications has contributed to demand declines in most industrialized regions. The United States, Japan, and Western Europe are forecast to experience less than 1% average annual growth through 2020, while developing regions (China, India, and the Middle East) will continue to exhibit the fastest demand growth, ranging between 3% and 4% annually.

The global naphthalene market has steadily grown to meet the global demand. During 2015–20, overall world consumption of naphthalene is expected to grow at an average rate of 2.8% per year.