Almost all MSG is consumed in food applications; major end users include the food processing industry (including producers of convenience foods, snacks, soups, instant noodles, condiments, and seasoning blends), restaurants, and institutional foodservice providers. In addition, MSG is sold directly to consumers. A negligible amount of MSG is used in animal feeds. Production of the chelating agent glutamic acid N,N-diacetic acid tetrasodium salt (GLDA) is a new and promising end use for MSG but accounts for a very small share of global consumption. 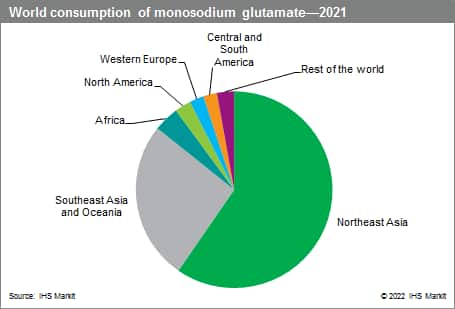 Northeast Asia accounted for 60% of world consumption in 2021, with mainland China alone accounting for 53.5% of world consumption. Consumption in the region is forecast to increase at an average annual rate of 1.5%, led by demand growth in mainland China with 1.6% during 2021–26. Japanese demand is currently satisfied by imports. Consumption is expected to increase at a comparatively modest pace in Japan, South Korea, North Korea, and Mongolia. In this region, food processor sales is the largest consumption segmentation, followed by restaurant and institutional foods and direct consumer sales.

Southeast Asia and Oceania accounted for 26% of world MSG consumption in 2021. Consumption in the region is forecast to increase at an average annual rate of 4.2%, led by demand growth in Indonesia, Vietnam, Thailand, and other Southeast Asian countries during 2021–26. In this region, countries have the tradition of using MSG during cooking and majority of the consumption goes to direct consumer sales.

Africa accounted for about 4% of world MSG consumption in 2021. The region has no MSG producers and relies entirely on imports to satisfy demand. Mainland China has replaced Brazil to become the major supplier to this region. Nigeria is the biggest market, accounting for about half of African MSG demand. Umami seasonings complement the staple diet of potatoes, rice, noodles, and soup. The food processor market is booming, with big companies such as Nestle making acquisitions and investments in recent years. African consumption is expected to increase at an average annual rate of 2.8% during the forecast period.

North America accounted for approximately 3% of world MSG consumption in 2021. Although the region produces MSG, it is a net importer of the flavor enhancer. Consumption is expected to increase at 2.7% during the forecast period. Many foods (notably savory snacks) that include added MSG remain popular with consumers and MSG continues to see widespread use in mainland Chinese, Japanese, Thai, Vietnamese, and Korean restaurants and in the homes of Asian-born residents. Nonetheless, the increased interest in foods that contain no artificial ingredients (such as added MSG) is expected to suppress the growth of MSG consumption in Canada. In the United Stated, the pandemic has led to changing consumer habits and preferences. MSG consumption in 2020 has experienced some mild increase due to growth in food processor sales, particularly convenient food sector such as frozen food and instant noodles, which more than offset the decline in restaurant sales. In 2021, MSG consumption continue to rebound with the reopening of restaurants. Growing demand for convenience foods and snacks, as well as restaurant and institutional foods drive the overall growth rate to be positive during 2021–26. In Mexico, the growing popularity of frozen foods and the prospects for MSG use as a salt replacement have the potential to stimulate MSG, but increased interest in healthy eating and widespread concerns about obesity might constrain consumption growth.

Western Europe was responsible for 2% of world MSG consumption in 2021. Western Europe consumes the majority of MSG from local production, but also supplies to the Central European market. Consumption is expected to grow by 2.8% during the forecast period. Consumption of MSG in food had declined before the pandemic, while there has been some growth of MSG consumption in 2020 owing to strong food processor sales in the convenient food sector, followed by a rebound of consumption in 2021. MSG will continue to cede some market share to yeast extracts (which are rich in naturally occurring glutamates); however, the substitution of MSG is still a challenge from a cost perspective and in terms of meeting the correct taste profile. Increased demand for MSG as a starting material for the chelating agent GLDA will have a positive effect on consumption growth, but the impact on the overall European market is expected to be modest.

Central and South America was responsible for 2% of world MSG consumption in 2021. Brazil is a major supplier and exporter, with two MSG production sites supplying both Americas and the global markets. In 2021, the top export destinations were Japan, Nigeria, and the Philippines. Brazil led the region in MSG consumption in 2021 and will continue to drive demand growth during the forecast period. Busier lifestyles, increased participation of women in the work force, and the expansion of the middle class are expected to boost demand for convenience foods, snacks, and seasonings, which in turn will stimulate MSG consumption in the region. The forecast average annual growth rate is 4.0% during 2021–26.

Rest of world include the Indian Subcontinent, CIS and Baltic States, Middle East, and Central Europe. The combined consumption accounted for 3% of world MSG consumption. Among them, India Subcontinent has the highest growth rate, which is 4.3% during 2021–26. In 2021, India was the largest consumer of MSG in this region, and the increased MSG consumption mainly relies on higher incomes, urbanization, and rising numbers of dual-income households. In addition, Pakistan’s Supreme Court imposed a nationwide ban on the sale, import, and export of MSG in March 2018 on the grounds that it was hazardous to human health. As a result, Pakistani consumption of MSG fell sharply in 2018 and MSG consumption is expected to remain at near-zero levels during the forecast period.

IHS Markit’s Chemical Economics Handbook - Monosodium Glutamate (MSG) is the comprehensive and trusted guide for anyone seeking information on this industry. This latest report details global and regional information, including