The following pie charts show world consumption of miscellaneous sulfur chemicals by type and by region: 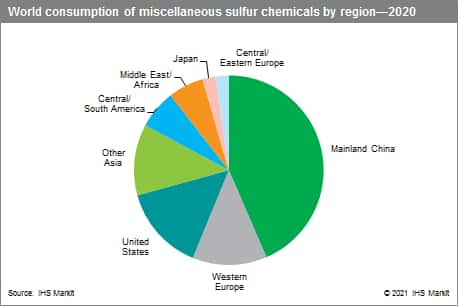 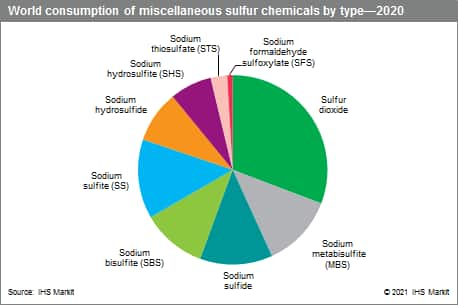 The markets that are anticipated to experience the largest growth over the forecast period include mineral ore processing, oil recovery, and use as a chemical intermediate for other sulfur compounds, including the manufacture of ammonium bisulfite, ammonium thiosulfate, and polyphenylene sulfide (PPS) resins.

Although developing regions may experience higher-than-average demand in some applications, the majority of end-use markets are mature and reflect very little and even declining growth. Furthermore, the growth potential for sulfur dioxide remains challenged by mounting regulations and environmental pressures, as well as the high risks and costs associated with handling and transportation.

Mainland China has taken a leading position for most derivative markets and has become the major global supplier. The rapid development in mainland China’s metal manufacturing (smelting operations) as well as increased demand for sulfuric acid in domestic fertilizer production has propelled the mainland Chinese sulfur industry. This expansion occurred at the same time as implementation of a series of environmental regulations to reduce sulfur dioxide emissions, which resulted in an overall contraction in most industrialized regions. Derivative manufacture will remain a primary outlet for mainland Chinese sulfur dioxide, particularly as efforts to further reduce emissions take hold.

IHS Markit’s Chemical Economics Handbook – Sulfur Chemicals, Miscellaneous is the comprehensive and trusted guide for anyone seeking information on this industry. This latest report details global and regional information, including