Methyl isobutyl ketone (MIBK) and methyl isobutyl carbinol (MIBC) are flammable, colorless, stable liquids that are largely consumed in solvent applications. MIBK is an excellent solvent for resins used in the production of surface coatings, as well as being widely used in rubber chemicals for the production of tires, as a solvent in the manufacture of pharmaceuticals and adhesives, and for specialized metallurgical extraction. MIBC’s major application is in the manufacture of lube oil additives, followed by its use as the principal flotation frother in treating copper and other ores. Total world MIBK consumption will grow moderately during 2021–26, driven by demand in Asia, especially mainland China and India. 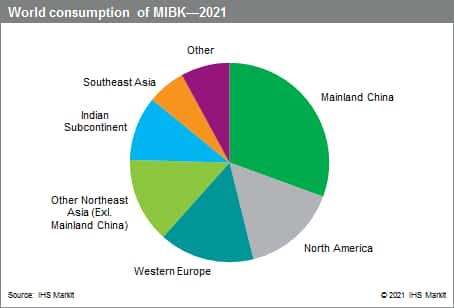 A majority of global MIBK is consumed in Asia, with mainland China accounting for half of regional consumption. Solvent applications (mostly in surface coatings) consumed the majority of MIBK in most regions (about 48% of total consumption in 2021). Although classified as a VOC, MIBK still benefits from increased demand in high-solids coatings, which can help in achieving a reduction of VOCs. Consumption of MIBK for coatings will continue to increase during 2021–26.

World MIBC consumption s estimated about 60,000–65,000 metric tons per year in recent years, mainly used in the Americas and Europe. World MIBC statistics are difficult to estimate but overall, MIBC will experience positive growth in lube oil applications and as a flotation frother (especially in actively mined regions).

IHS Markit’s Chemical Economics Handbook – Methyl Isobutyl Ketone (MIBK) and Methyl Isobutyl Carbinol (MIBC) is the comprehensive and trusted guide for anyone seeking information on this industry. This latest report details global and regional information, including