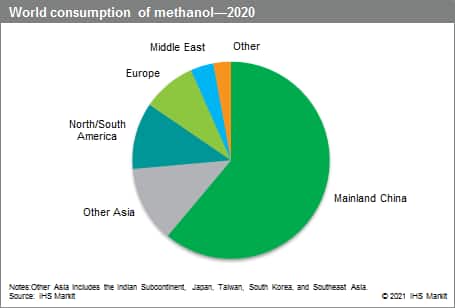 Since the turn of the century, while methanol demand has broadly stagnated in most regions of the world, it has grown at a fast pace in Northeast Asia. Fast-rising fuel demand in mainland China, as well as the development of unconventional chemical production plants (MTO) have primarily driven methanol consumption in Northeast Asia. The sizeable development of global methanol production has created an opportunity for mainland China to diversify away from conventional naphtha cracking to produce olefins. Methanol demand for fuel applications has recently slowed, primarily because of decreasing demand for fuel applications, but new developments within the chemical industry have filled the gap. Despite the recent impact of the COVID-19 pandemic on methanol markets globally, world consumption of methanol is projected to continue to increase during 2020–25.

The methanol production landscape is highly fragmented; the world’s top 10 producers account for less than 30% of global capacity. Methanex is the methanol market leader, with production assets in the Americas, Africa, and Asia, and benefits from a comprehensive supply chain network to distribute methanol on a global scale. This report further provides a detailed overview of all major producing companies by region, including capacity, location, and feedstock used.

Global methanol capacity is forecast to further grow, with mainland China and the United States accounting for most of the new increases. Methanol trade flows are projected to remain of major importance to balance global markets, but some key shifts are anticipated in the coming years. Uncertainties brought about by the COVID-19 pandemic, an escalating trade dispute between the United States and mainland China, the reimposition of US sanctions on Iran, as well as heightened economic and security concerns in certain regions, have cast a shadow over the global economy and this report includes the latest economic and industry forecasts.

IHS Markit’s Chemical Economics Handbook –Methanol is the comprehensive and trusted guide for anyone seeking information on this industry. This latest report details global and regional information, including