More than 70% of global melamine consumption is for laminates and wood adhesives production. Laminates are found in products such as furniture, floors, kitchen cabinets and countertops, and walls. Wood adhesives based on melamine are found in a number of wood products including medium-density fiberboard (MDF), particleboard, and plywood. Melaminemodified wood adhesives improve the durability and moisture resistance of the final woodboard. 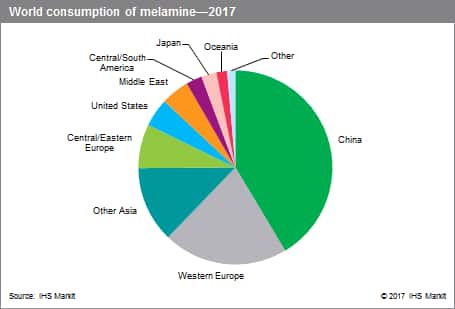 Overall economic performance will continue to be the best indicator of future demand for melamine. Demand in most downstream markets is greatly influenced by general economic conditions. As a result, demand largely follows the patterns of the leading world economies. The major end-use markets include construction/remodeling, automotive production, and original equipment manufacture.

China is the largest single participant in the melamine market, accounting for 41% of world consumption in 2017; it also accounted for about half or more of world capacity, production, and exports. This trend is expected to continue until 2022, as growth in Chinese consumption will result in additional capacity and increased production. China is forecast to experience the fastest growth rates in melamine consumption during 2017–22 (about 4%). Domestic consumption will continue to be driven by the real estate market. Melamine consumption in wood panels and laminates (in floors and furniture) will increase for domestic demand and exports. Melamine use in surface coatings for autos will slow somewhat as a result of lower vehicle production growth, but surface coatings use (e.g., for appliances and metal containers) will increase.

As a region, Europe is the second-largest melamine market, accounting for 28% of world consumption in 2017. During 2017–22, melamine consumption in Europe overall is forecast to grow at an average annual rate of 2%. Annual growth in excess of 4% is expected for Central and Eastern Europe, largely the result of increased production of laminates and wood adhesives. There will be strong growth for laminate flooring as a result of popularity with consumers and increased use for surface coatings for autos as a result of increased vehicle production in the region. Consumption growth in Western Europe is forecast at a more modest rate of 1–2% per year during 2017–22. Different countries in Western Europe are expected to experience different growth rates. Growth factors in the region include residential construction and remodeling, do-it-yourself (DIY) projects, flooring innovations, and vehicle production.

Other Asian countries, excluding Japan, are expected to show modest consumption growth during 2017–22, at an average annual rate of just over 1%. India is the main consumer of melamine in this region and will experience strong melamine demand in the residential market. Other major melamine-consuming countries include Malaysia and Indonesia, which will experience slightly lower growth than India but will continue to use melamine for wood panels and subsequent exports.

Continued efforts to reduce formaldehyde emissions are likely to continue in all regions. This has a positive effect on melamine consumption since melamine is a strong formaldehyde-binding agent. So-called “low-formaldehyde” boards use more melamine-modified wood adhesives in their manufacture. Increased melamine content results in reduced formaldehyde off-gassing.

The location of new melamine investments has become increasingly important. Decisions on new investments are typically made based on a combination of (sometimes competing) factors. Some of the more important factors include proximity to large markets, proximity to wood resources, and access to the lowest-cost natural gas/urea. Back-integration into urea is a vital factor for success because of widely fluctuating urea prices.