In 2016, beverages (both liquids and powders, mainly fruit-flavored beverages) accounted for 52% of the world consumption of DL-malic acid; confections and food accounted for most of the remainder, at 38%.

In most applications, DL-malic acid provides the following functions: 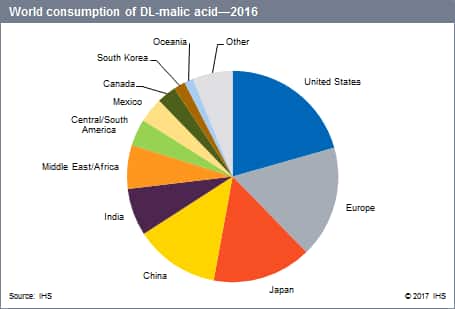 In 2016, Asia (including China) accounted for almost 45% of the world consumption of DL-malic acid, followed by North America at 27% and Europe with 17%. This distribution reflects the fact that markets for ready-to-drink beverages and processed foods are highly developed. Growth in demand is highest in the developing markets of Asia, Central and South America, the Middle East, Africa, and Central and Eastern Europe, where concerns about health and nutrition are relatively nascent and diet products and nutritional foods and beverages have less market penetration. Demand in these markets is also forecast to increase as the popularity of processed food and ready-to-drink beverages grows, along with improving living standards. Demand for DL-malic acid is forecast to grow at an average annual rate of 6–7% in India and at 2.5–3.5% globally.