This report covers the major amino acids used in animal feed throughout the world. Although the report discusses nonfeed uses, the main focus is on animal feed use. Lysine, methionine, threonine, and tryptophan are the four major amino acids used in poultry and swine diets. Lysine and methionine are both very large markets; threonine and tryptophan, although smaller markets, are higher-growth markets. The lysine market is almost twice the size of the methionine market, with methionine being about twice the size of the threonine market. The market for tryptophan is significantly smaller.

Amino acid production is highly concentrated, with the top five producers dominating 50% of the market share for each of the product categories, with the methionine and tryptophan at more than 90%. Key market participants include Hebei Meihua Biotech, Ningxia Unispendour, Evonik, CJ CheilJedang, Jilin Changchun Dacheng, Fufeng Group, Ajinomoto, and Adisseo. There has been rapid capacity expansion in the past five years, driven by strong demand from poultry and swine production. 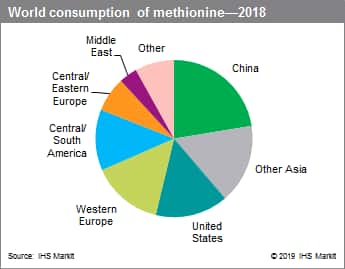 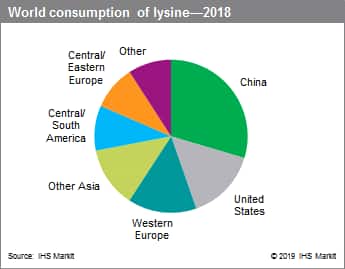 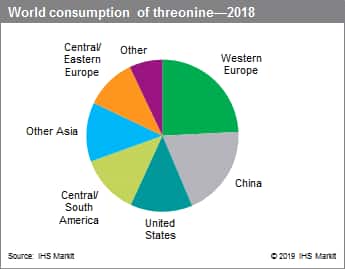 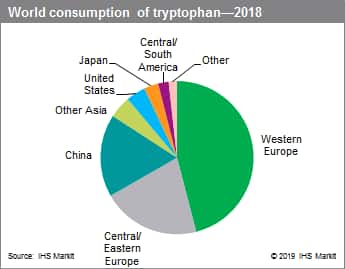 Methionine consumption has entered a mature stage in developed countries, with new growth being driven by developing countries. Methionine is widely consumed in China and Other Asia (together accounting for about 40% of consumption in 2018), with the United States, Central and South America, and Western Europe each having a similar share of 13-15%. Western Europe and the United States remain the major methionine producers and exporters, but in recent years, new capacity and production from China and Other Asia have entered the market. Consumption growth will continue at over 5% per year, driven by driven by Other Asia, China, and Central and South America, as well as Central and Eastern Europe.

Lysine consumption has jumped globally since 2010 (the only exception being Western Europe), as higher concentrations of lysine are used in animal diets. Production and consumption are concentrated in China, followed by the United States and Other Asia. All three regions are major exporters, with Other Asia emerging as a new seller after rapid capacity additions in the last few years. As a result, feed-grade lysine production in Western Europe has ceased, being replaced by imports from China. Growth of over 3% per year is expected for the major lysine consuming regions.

Threonine and tryptophan markets are growing strongly as animal nutrition knowledge drives demand higher on a global basis. Threonine production is dominated by China, with over 90% of global capacity. Western Europe is the leading consumer, followed by China, the United States, Central and South America, and Other Asia. Robust growth of over 7% is expected over the next five years, with all regions growing on the back of higher concentrations of threonine supplementation in animal diets.