This report covers primarily lithium carbonate and lithium hydroxide, with additional data on lithium chloride, lithium bromide, lithium metal, and organolithium compounds such as butyllithium, and lithium hypochlorite. Lithium is sourced from the evaporation and concentration of lithium-containing brines or from the metallurgical processing of hard rock lithium-bearing pegmatite deposits, mainly containing spodumene. Australia, with its hard-rock derived spodumene concentrate production, dominated lithium raw material production by source in 2020. Production of lithium from salt lakes in Chile, Argentina, the United States, and mainland China still represent a large part of the market share. It is also typically more cost effective and environmentally sustainable, from the perspective of carbon dioxide emissions. Mainland China continues to dominate the production and capacities for the chemical step in lithium compounds production.

The following chart shows world consumption of lithium by end use: 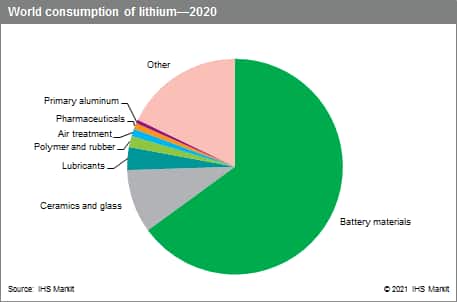 Batteries, in general, and rechargeable batteries in particular, are the leading market for lithium compounds. During 2015–20, global lithium consumption increased by nearly 15% annually, with growth of more than 22% per year forecast in 2020–25. The main driver for this growth in demand has been lithium-ion batteries (LIBs) for electric vehicles (EVs), including battery electric vehicles (BEVs), hybrid electric vehicles (HEVs), and plug-in hybrid vehicles (PHEVs). Consumption for this market increased at double-digit rates in 2015–20 to surpass that of rechargeable batteries in mobile devices (cellphones, laptop computers, toys, and power tools), formerly the largest battery market.

Governments globally have introduced incentives to encourage individuals and business fleets to buy EVs in an attempt to advance the technology and to reduce emissions from internal combustion engines (ICEs). Mainland China entered the EV market and quickly became the largest producer and consumer of EVs. In 2015, mainland Chinese car brands began competing with Japanese, South Korean, European, and US brands in the market. Vehicle producers, battery producers, and cathode producers are continually striving to improve battery energy, size, weight, and safety, as well as reduce the price to make EVs more affordable.

Historically, lithium produced from mineral-based sources was consumed primarily in technical applications, while production from brines was consumed primarily in chemical applications. Over the last few years, mainland China has increased the production of lithium carbonate and lithium hydroxide battery grade using concentrated spodumene ore imported from Australia and lithium carbonate of lower grades from South America. The chemical market is dominated by lithium battery material production. Lubricant greases, primary aluminum production, drop resistant glass for smartphones and tablets, air treatment as an absorbent and desiccant, continuous steel casting, initiator in rubber and thermoplastic applications, pharmaceuticals, and aluminum-lithium alloys in aerospace applications are other chemical markets for lithium. The leading technical applications include the glass, ceramic, lubricants, and metallurgical industries, where its low cost and inherent benefits of having alumina and silica content make it the product of choice.

The projected growth in battery applications led to continued efforts to bring new production capacities on-site at different levels of the supply chain. There are only a few successful new mining projects coming online, predominantly in Australia. Substantial expansions of capacity occurred mostly at the facilities of large, established producers trying to capture or maintain the market share or at the side of converting facilities in mainland China. Capacity increased by more than 22% per year on average during 2015–20 and is forecast to grow by more than 12% annually in 2020–25. Greenfield brine deposits are being explored and developed in Argentina, Chile, Bolivia, mainland China, and the United States. New mineral deposits are being developed in Australia, Canada, mainland China, Mexico, the United States, and several European and African countries.

The use of lithium carbonate, hydroxide, and other lithium chemicals in batteries in EVs is driving the expectations for lithium demand, while political, environmental, and economic factors weigh heavily on the decision to use EVs, including HEVs and PHEVs. The existing lithium raw materials supply is sufficient for the projected growth in demand from EVs past 2025.

At present, the market already experiences overcapacities in spodumene concentrate production and lithium carbonate converting capacities. This situation led to low capacities utilization rates of mainland Chinese converters and, in the future, many of the expansions and new projects in Australia. It has been caused partly by the COVID-19 pandemic affecting demand, and also, to some extent, the operation of mining facilities. No shortages of lithium are expected to occur during the forecast period. Afterwards, there is the possibility of lithium hydroxide supply becoming tight, if high nickel cathode materials adoption in lithium-ion batteries maintain its current fast rate of growth.

IHS Markit’s Chemical Economics Handbook – Lithium, Lithium Minerals, and Lithium Chemicals is the comprehensive and trusted guide for anyone seeking information on this industry. This latest report details global and regional information, including

IHS Markit’s Chemical Economics Handbook – Lithium, Lithium Minerals, and Lithium Chemicals has been compiled using primary interviews with key suppliers and organizations, and leading representatives from the industry in combination with IHS Markit’s unparalleled access to upstream and downstream market intelligence and expert insights into industry dynamics, trade, and economics.