The two most abundant biopolymers on earth are cellulose and lignin. Both are harvested from trees. Cellulose is the main constituent of plant cell walls and of vegetable fibers such as cotton. Lignins are formed in the cell walls of wood and provide structure to the plant. They do not degrade or rot easily. Cellulose is separated from lignin to make paper and packaging materials, while lignin is much less desired and often burned for fuel. Some lignin is recovered in the form of lignosulfonates, which are used mainly as dispersants.

Lignosulfonates consist of a mixture of sulfonated lignin, sugars, sugar acids, resins, and inorganic chemicals. Most lignosulfonates are obtained from the spent pulping liquor of sulfite pulping operations; some are also produced by postsulfonation of lignins obtained by sulfate pulping (kraft process). Recovered coproduct lignosulfonates may be used with little or no additional treatment or they may be converted to specialty materials with the chemical and physical properties adjusted for specific end-use markets. 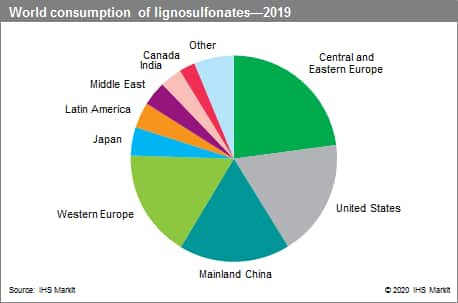 The largest-volume use of lignosulfonates is in concrete admixtures, but they are also used in a wide variety of functions where they serve as dispersants and binders in the construction, mining, agricultural, and many other industries. Use in concrete admixtures has stagnated, or even decreased, in Western Europe, the United States, mainland China, and Japan as a result of competition from polycarboxylate-based products that feature higher performance with higher concrete strength. However, use of lignosulfonates in developing countries continues to increase as it displays properties that are sufficient for many projects and is priced lower than competitive products.

Most of the end uses are well established. A few new applications have been commercialized, including use as a feed additive for swine, as a preservative in corn and cob maize silage, and as a dispersant in foodstuffs and drink for carotenoids and fat-soluble vitamins.

In the longer run, the industry is hoping that demand for lignosulfonates will grow because of its “greenness,” since it is sourced from renewable feedstocks. Lignosulfonates could conceivably be converted to aromatic monomers and oligomers or can be modified by traditional chemistry in water.

The industry consists of many smaller, independent producers, especially in mainland China. There have been considerable reductions in capacity over the last 20 years, and the industry could consolidate further. The two largest world lignosulfonate producers are Borregaard LignoTech and Rayonier. Together, these two companies accounted for nearly 49% of world lignosulfonate capacity as of May 2020.

The majority of the lignosulfonates produced at sulfite pulping operations are not isolated and are burned for fuel, as the market is limited. Since lignosulfonates have a relatively low monetary value, shipping costs usually make transportation of the liquids over long distances prohibitive. Dried lignosulfonates dominate overseas trade and overland lignosulfonate trade over distances greater than 500 miles (800 kilometers).

The global market for lignosulfonates is forecast to grow slowly, at an average annual rate of about 1%.

IHS Markit’s Chemical Economics Handbook –Lingnosulfonates is the comprehensive and trusted guide for anyone seeking information on this industry. This latest report details global and regional information, including

IHS Markit’s Chemical Economics Handbook –Lingnosulfonates has been compiled using primary interviews with key suppliers and organizations, and leading representatives from the industry in combination with IHS Markit’s unparalleled access to upstream and downstream market intelligence and expert insights into industry dynamics, trade, and economics.