Lactic Acid, Its Salts and Esters

Lactic acid is widely used as an acidulant, flavor enhancer, and shelf-life extender in foods and beverages; its sodium and potassium salts have preservative and antimicrobial properties. Lactic acid also serves as the starting material for ethyl lactate, an environmentally friendly solvent, and polylactic acid (PLA), a biodegradable polymer. 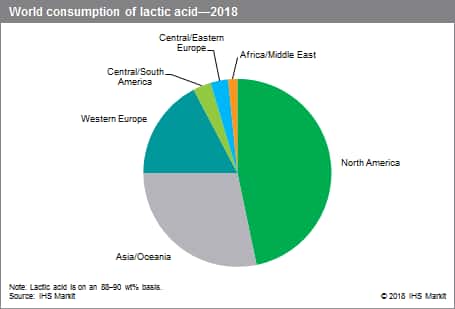 Worldwide lactic acid consumption is forecast to increase at an average annual rate of 5–6% from 2018 to 2023. Robust demand growth is expected in China and Other Asia (especially Thailand) as a result of increased PLA production. In other regions, more moderate consumption growth is expected.

Western European lactic acid use is driven by consumption in food and beverages. At present, the region has very limited PLA production capacity, relying on imports to satisfy demand. Consumption of lactic acid is expected to grow moderately during 2018–23.

In Japan, the food and beverage sector is the largest end use for lactic acid, followed by industrial applications, pharmaceuticals, and personal care products. Japanese consumption of lactic acid and its derivatives is expected to grow moderately over the next five years. Japan relies on domestic production of lactic acid as well as on imports from China, Thailand, and other countries.