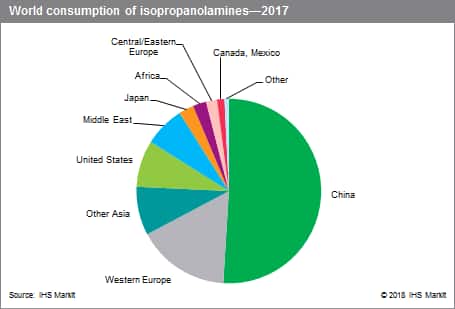 The major isopropanolamine producing regions (China, the United States, and Western Europe) accounted for approximately 75% of total consumption in 2017. China is the major producer and exporter of isopropanolamines and will continue to be so through 2022. Production in China increased significantly during 2014–17. Exports also increased significantly during that period, especially to Western Europe, the Middle East, and Other Asian countries.

Although TIPA for cement applications is driving the isopropanolamine market, particularly in Asia, TIPA is in competition with other chemicals, such as diethanol isopropanolamine (DEIPA), which is also growing in the Asian market.

In gas purification, methyldiethanolamine-based (MDEA-based) solvents (both as MDEA/piperazine blends and straight MDEA) have been capturing most of the growth in this application as have ethanolamines at the expense of DIPA. Monoethanolamine-triazines (and other triazines) are also used as hydrogen sulfide scavenging agents.