This report covers the major zinc chemicals of commercial importance: zinc oxide (accounting for 62% of the market for the three chemicals), zinc sulfate (33%), and zinc chloride (5%). The major market segments for zinc chemicals include rubber compounding, agriculture, and ceramics.

Zinc chemicals continue to show growth in the area of fertilizers, animal feed, and food consumption. As more than 50% of the soils in the world are considered to be zinc-deficient and with the population having doubled in the past 30 years and projected to increase from 7 billion to over 9 billion by 2050, and arable land per person declining, crop yields must increase. In many studies, including projects in Brazil, China, India, and Turkey, agricultural yields were increased by adding zinc to standard fertilizers and premixes. In addition, various organizations and businesses alike have begun to emphasize the benefits of zinc used in food and nutritional supplements.

The following pie chart shows world consumption of zinc chemicals by end use: 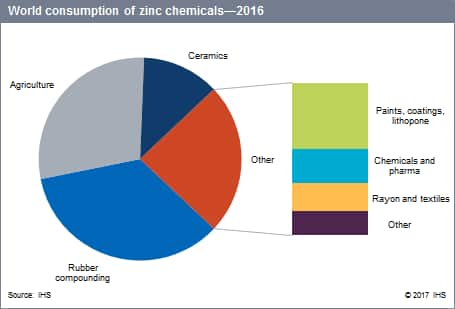 Zinc oxide used in the manufacture of rubber compounding is driven largely by automotive markets, or more specifically tires, belts, hoses, and other. Global automotive production has rebounded strongly since the economic downturn, with considerable rubber capacity increases reflected in India, Taiwan, CIS, Brazil, and China. In more recent years, the United States has begun to experience a surge in new tire and rubber capacity as global manufacturers move closer to automotive production centers. As global demand in this segment continues to rise, changes in consumer trends may lead to slower growth near the end of the forecast period.

The third-largest end-use market is the consumption of zinc oxide in the production of tiles, ceramics, and glass. This market primarily trends along with economic conditions and has begun to reflect improved demand growth globally. Although historically driven by tile and ceramic manufacturing in Europe, rapid expansion over the past 15–20 years has resulted in Chinese market dominance. Greater demand in developing countries, such as Brazil, India, and various Southeast Asian countries more recently has begun to reflect further shifts into those regions. The Other category accounts for an assortment of applications including consumption for chemical intermediates, paints and coatings, textiles, batteries, and electronics.

At present, use of zinc oxide as a vulcanization agent in rubber compounding remains the single largest end use. In 2016, the volume of zinc oxide used in the manufacture of tires and other consumer rubber goods amounted to 56% of total zinc oxide demand or 35% of total zinc chemical demand for the year. Although Chinese tire markets softened in 2016, the country remains the most dominant consumer at approximately 40% of global zinc oxide demand annually. While automobile tire capacity additions in Southeast Asia and South America helped bolster global zinc oxide consumption, further capacity buildup in North America, Central Europe, and the Middle East will solidify global growth at around 3% per year over the next several years.

Combined, the rubber compounding and agricultural markets accounted for approximately two-thirds of total zinc chemical consumption as of 2016. Demand for the three primary zinc chemicals is forecast to increase at an average annual rate of 0.9–3% through 2021.