This report covers supply and demand for a number of industrially important potassium chemicals: potassium metal and potassium hydroxide, sulfate, nitrate, carbonate, and bicarbonate. Industrial consumption of potassium chloride is also included; producers and fertilizer markets for this chemical are covered in greater detail in the CEH Potash report.

Potassium is an important nutrient, and the sulfate, chloride, and nitrate salts are used primarily as fertilizers, although they also have some industrial applications. Industrial markets are most important for potassium carbonate, which is used increasingly in fracking applications.

Potassium chloride is the most commonly used and least expensive source of potassium for plant nutrition, and fertilizers represent the dominant market for this chemical. The largest industrial market for potassium chloride is for potassium hydroxide production. The rise in natural gas prices during the earlier part of this decade, coupled with weak agricultural demand and price competition from imports, resulted in consolidation of the industry in both the United States and Western Europe. 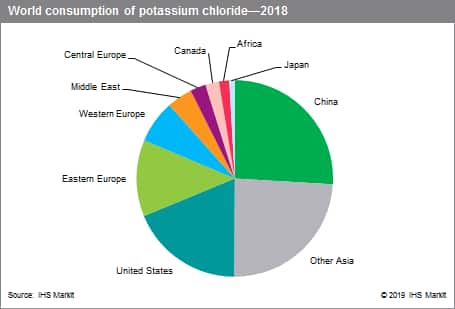 Most potassium sulfate production is for fertilizer use for crops that are intolerant of the chloride ion. Capacity in Canada and the United States has increased since the mid-1990s. Global demand for potassium sulfate fell by more than half in 2009 as a result of the economic crisis. Farmers opted to purchase relatively cheaper nitrogen0based fertilizers for their crops. However, overall global demand for potassium sulfate has been increasing over the past decade, and further growth is expected, particularly for specialty crops in the Asia Pacific region and for controlled-release fertilizers in the United States.

Potassium nitrate is the second0largest source of nonchloride potassium fertilizer. It is more soluble than potassium sulfate, and its use as a fully soluble fertilizer in applications such as fertigation (applying a soluble fertilizer via the irrigation system) and interior landscaping is growing. Potassium nitrate’s major industrial use was as a component of specialty glasses, especially for cathode0ray tubes (CRTs) for television sets and computer monitors. However, the CRT market has declined dramatically in the last five years with the growing popularity of LCD and plasma screens. In China, fireworks and black powder production are a significant market. Potassium nitrate is also an important raw material for the production of frits for the ceramics and enamel industries. In addition, a combination of potassium nitrate and sodium nitrate is used as a thermal storage medium in solar-based electricity-generating plants. Some growth in both these applications is expected over the next five years.