Hydroquinone (HQ) is a white crystalline substance used mainly as inhibitors in polymerization as well as to produce antioxidants for food, rubber, plastic, and other industrial antioxidants. HQ is also used in the production of polyetheretherketone (PEEK), an advanced engineering material used in aerospace and automotive industries.

Polymerization inhibitors and antioxidants, including p-phenylenediamines and substituted hydroquinones, are the largest applications for hydroquinone. Both applications depend on the production of several monomers (for plastics) and polymers, such as unsaturated polyester resins. Demand for polyetheretherketone (PEEK) is expected to grow following the trend toward lightweight material and the need for advanced engineering material. Demand in photographic processing had declined in most regions as the conversion to digital photography continues to expand, but the decline is stop and made the consumption stable.

Asia is the largest hydroquinone market in the world, accounting for more than half of world consumption in 2019. China is the single largest consumer of HQ, while the United States is the largest exporter. Europe is the second,largest market for HQ. 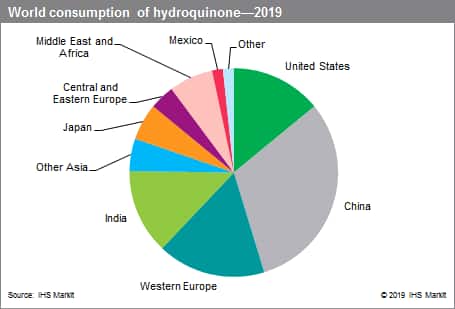 Although there are many producers and production facilities in China, Chinese production remains low owing to stringent environmental regulations resulting in plant shutdowns. Economics play a role as well as most Chinese producers use the oxidation of aniline process, which has higher costs and requires more systems to control waste and emissions.

Key findings in the hydroquinone market include

Hydroquinone, also referred to as quinol, HQ, or 1,4-dihydroxybenzene, was first obtained in 1820 by dry distillation of quinic acid. The structure of this white, crystalline substance was determined in 1844 after the reduction of quinone led to its isolation. Hydroquinone is very soluble in water and is combustible if preheated. Hydroquinone has also been found in the leaves of blueberry, cranberry, cowberry, and bearberry plants, where the unhydrolyzed form is called arbutin. Hydroquinone is consumed predominantly in antioxidants and polymerization inhibitors. It is also used in cosmetic applications, mainly as depigmenting agents in skin lightening creams. Moreover, hydroquinone is an important raw material for polyetheretherketone (PEEK), a high,performance engineering thermoplastic material used in automotive, aerospace, medical, and healthcare industries, as well as the electrical and electronics industries.