In most markets, hydrogen peroxide functions as a bleach or oxidizer. As such, it often competes with other chemicals capable of performing similarly. Some derivatives (e.g., perborates) also function as bleaching or oxidizing agents. Regional cost differences, consumer preferences and technical differences in product performance enter into the decision to use hydrogen peroxide or one of its derivatives rather than another product. Since these considerations vary by region, the consumption patterns vary in different parts of the world.

The hydrogen peroxide market is dominated by the pulp and paper industry, with the main uses being in pulp bleaching and deinking of recycled paper. Growth of the pulp industry has been particularly strong in Southeast Asia and Central and South America. Both regions have the competitive advantage of fast-growing eucalyptus as pulp raw material, and accordingly, investment in new pulp mills is made primarily in these regions. Southeast Asian producers have an additional advantage—their proximity to growing markets. 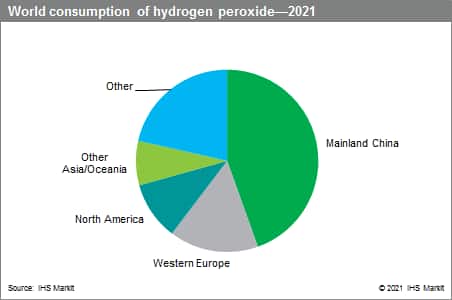 The downstream chemical markets are expected to grow, with the exception of sodium percarbonate. The trend toward liquid detergents continues at the expense of powder detergent use, and percarbonate use accordingly. Perborate is having a renaissance, after nearly disappearing in powder detergents. Consumption volumes are increasing at a fast rate in the North American unconventional oil market. Uses of hydrogen peroxide and peracetic acid as a disinfectant, for microbial control, for animal hygiene, and in environmental and industrial areas of use are also growing at healthy rates. The single most important use of hydrogen peroxide in this segment is the production of propylene oxide via the HPPO process.

The first HPPO plant was started up in 2008 by SKC/Evonik in South Korea. In the meantime, other plants using the same technology were started up in Europe, the Middle East, and other Asian countries, and are running with high capacity utilization rates as they provide a competitive production route to propylene oxide. Additional HPPO plants are under construction or plans to build them in Asia and the Commonwealth of Independent States (CIS) have been announced. No plant has been announced yet for North America; however, cheap energy costs would allow highly competitive production of hydrogen peroxide, which coupled with availability of propylene feedstock, make it likely that an HPPO plant could also be built in the coming years.

Other smaller segments of downstream chemical use, i.e., epoxidized vegetable oils and peracetic acid, are also growing and they are being increasingly used as plasticizers in a growing plastics market and as an oxidizing agent, respectively.

Specialty grades of hydrogen peroxide are being used in food, cosmetics, and the electronics industry, and have been growing in line with growth in these industries. For the forecast period it is expected that a growing world population, increasing average wealth, and increasing disposable incomes will continue to result in growing consumption of hydrogen peroxide in these sectors.