Hydrogen Cyanide (HCN) is extremely toxic. At manufacturing plants, extensive monitoring systems are compulsory in areas of production and use. It is extremely difficult to transport and store, so most HCN is produced and used on site and inventories are kept to a minimum. There is no international trade in HCN. The main end use for HCN is adiponitrile, as a precursor for polyamide production, consuming 31% of the HCN produced. The only regions that produce adiponitrile are the United States and Western Europe.

Production of acetone cyanohydrin, a precursor for methyl methacrylate production, was the next-largest use for HCN, accounting for 27% of total consumption. The major regions for acetone cyanohydrin production are the United States, Western Europe, and China, although smaller plants can be found in other world regions. 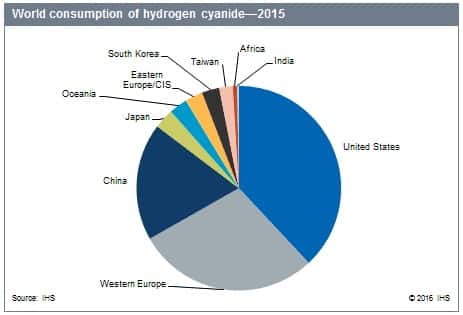 HCN is a vital building block for many chemical and life-supporting applications. The major global use over the last decade is as a starting material, together with butadiene, for the production of adiponitrile. Most adiponitrile produced is hydrogenated to Hexamethylenediamine (HMDA), an important intermediate in the production of nylon-type polyamide 66, 610, 612 and hexamethylene diisocyanate. Growth in HCN consumption for adiponitrile follows the nylon resin and fiber market closely.

Acetone cyanohydrin is used primarily to produce Methyl Methacrylate (MMA), which is in turn used for coatings and sealants and for polymethylmethacrylate production. MMA can also be produced from ethylene. Lucite International has developed Alpha Technology, a new, patented technology that uses ethylene, methanol and carbon monoxide. Plants are planned for Saudi Arabia and the United States over the next five years. The advantage is that no HCN is required, avoiding difficult and dangerous handling, and resulting in a possibly cheaper product. One disadvantage is the extremely high construction cost of the new process.