This report provides an overview of the global market for hydrocolloids—water-soluble polymers extracted from plant or animal sources, or generated in fermentation reactions. Native (unmodified) and modified starches account for the great majority (95%) of the market by weight; smaller-volume, higher-priced materials such as gelatin, guar gum, casein, xanthan gum, gum arabic, and carrageenan make up the remainder. 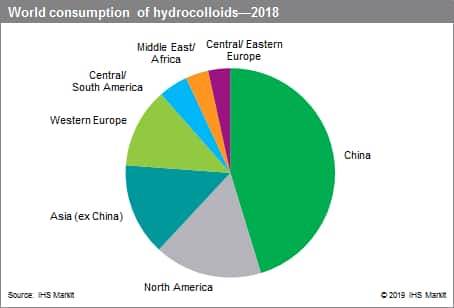 China will drive future market growth. In 2023, China is expected to account for 65–70% of the increase from 2018 market volumes. Chinese hydrocolloid consumption is expected to rise by 4.8% per year through 2023, exceeding the world average annual growth rate of 3.3%. Other Asia and Oceania will also experience above-average consumption growth (3.7% per year) during the forecast period. All other regions will see slower growth, with average annual growth rates ranging from 0.3% in Japan to 3.1% in India.

Hydrocolloids are versatile materials with a wide range of applications. Overall demand for hydrocolloids will track growth in major end-use industries, including paper, food, pharmaceuticals, and oil and gas production.

Paper and board production is the largest end use for starches. They serve as binders, sizes, and coatings in the papermaking process; starch-based adhesives are essential to the manufacture of corrugated cardboard, paper bags, and envelopes.

Food applications are second in importance for starches, but they represent the single-most-important end use for many other hydrocolloids. Pectin serves as a gelling agent in jams, jellies, and marmalades; gum arabic inhibits sugar crystallization in soft drinks; locust bean gum maintains ice cream’s creamy texture by controlling ice crystal formation, to give just a few examples.

Other applications for hydrocolloids include pharmaceuticals and oil and gas production. Gelatin is used in the production of tablets, two-piece hard capsules, softgels, and gummy vitamins; guar gum and its derivatives serve as thickeners in hydraulic fracking fluids.

The hydrocolloid market has a reputation for volatility but this is somewhat undeserved. Raw materials for various hydrocolloids are periodically in short supply due to bad weather, poor harvests, or political disruptions, but only one hydrocolloid—guar gum—has experienced major fluctuations in supply and demand in recent years. In this case, demand for guar gum surged because of the dramatic expansion of hydraulic fracking activity in the United States. The collapse of crude oil prices at the end of 2014 led to a reduction in drilling activity and lower consumption of guar gum. The post-2016 rise in crude oil prices, combined with increases in fracking activity in the United States and elsewhere, have revived demand for guar gum, but changes in the food and oil and gas industries have somewhat tempered market growth. In the food sector, processors have reformulated many products, replacing guar gum with other hydrocolloids such as xanthan gum or locust bean gum. In the energy sector, the use of guar-free slickwater fluids—cost-effective alternatives to guarthickened fracking fluids—continues to increase.