Hydrochloric acid is an integral part of the worldwide chlorine industry. Most of the HCl produced in the United States, Western Europe and Japan is generated as a by/product in the manufacture of a wide variety of organic chemicals via chlorination reactions. This supply depends largely on demand for the primary products. A significant amount of by-product HCl is generated when ethylene dichloride (EDC) is cracked to make vinyl chloride monomer (VCM). This HCl is usually recycled back to the EDC reactor for additional oxychlorination and for the most part does not enter the commercial market. Similarly, most of the HCl generated in the production of chlorinated C1s (primarily methylene chloride and chloroform) is recycled to produce additional methyl chloride. 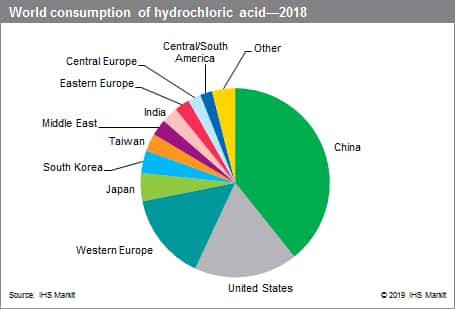 About 40 processes generate HCl as a coproduct and about 110 chemical manufacturing processes utilize hydrochloric acid as a raw material.

Despite the recent slowdown of the Chinese economy, the country is expected to have the largest growth in HCl production and consumption during 2018-23. Growth rates for North America will also be strong as a result of increases in chlorovinyls production, which have been stimulated by the competitive advantage of low feedstock prices and low energy prices following the unconventional oil boom in recent years. With the recent drop in oil prices, this advantage is less pronounced, yet the investments that are made or are on the way will result in higher production. Consumption of HCl in the oil field sector declined again from the previous high to lower levels with the oil price drop. It is expected that oil prices will increase again and that HCl consumption will increase in line. The main producer of unconventional oil is currently the United States; however, China and Argentina are likely to also start large/scale production

The chlorine industry, including the production, sale, and consumption of derivatives such as hydrochloric acid and anhydrous hydrogen chloride, has been under pressure as a result of evidence that several chlorine/containing products are harmful to the environment, workers, and the general public. Concern over the depletion of the earth’s ozone layer associated with the release of chlorofluorocarbons (CFCs) into the atmosphere resulted in worldwide agreements at the 1987 Montreal Protocol and subsequent meetings to phase out emissions of ozone/depleting compounds. Except for chemical precursor use, production of CFCs, 1,1,1-trichloroethane, and carbon tetrachloride was phased out starting in 1996. Hydrochlorofluorocarbons (HCFCs), introduced as alternatives to CFCs, will also be phased out within the next 10 years; the timing of the phaseout varies by country. There are no plans to phase out HFCs. All these fluorocarbons generate HCl in their production, thus affecting market supply. Similarly, there are concerns about climate change and global warming potential (GWP). As a result, various chemistries will be phased out that have high GWP. For detailed information on legislation affecting the chlorine and fluorocarbons industries, see the CEH Chlorine/Sodium Hydroxide and Fluorocarbons reports.