High-intensity sweeteners (HIS) are a structurally diverse set of compounds that share an important attribute: they are much sweeter than sucrose (table sugar). Unlike sugar, HIS are noncaloric and noncariogenic (they do not contribute to dental caries). Most HIS—including acesulfame K, aspartame, cyclamate, saccharin, and sucralose—are artificial sweeteners, produced by chemical synthesis; a few, including stevia and monk fruit extract, are natural products.

Worldwide consumption of HIS is largely dependent on the production of diet carbonated soft drinks and food. Beverages make up the majority of world HIS consumption, followed by food, tabletop sweeteners, personal care products (such as toothpaste and mouthwash), and pharmaceuticals. A few HIS have industrial applications as well; saccharin, for example, is used in electroplating. 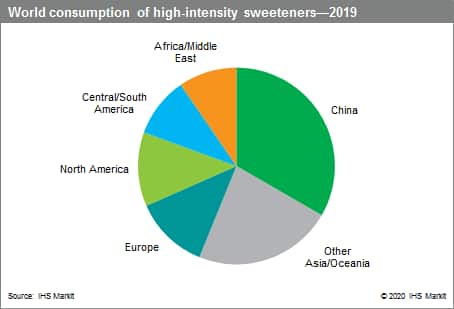 The outlook for high-intensity sweetener consumption during 2019–24 varies by region and by sweetener. Demand for the most mature, highest-volume HIS—cyclamate—is declining in all regions except China and Other Asia/Oceania, driven by a shift to more intensely sweet HIS. Consumption of two other mature sweeteners—saccharin and aspartame—is flat or declining in the Americas and Europe although consumption continues to increase in Asia, the Middle East, and Africa. In contrast, consumption of acesulfame K, sucralose, and stevia extract is growing in all regions.

Consumption of stevia extract is expected to increase at a higher rate than that of other HIS during 2019–24, largely because of consumer preferences for natural sweeteners. Nonetheless, stevia’s share of the total HIS market remains small. The increased availability of next-generation stevia sweeteners with improved taste profiles will support continued demand growth.

IHS Markit’s Chemical Economics Handbook –High-Intensity Sweeteners is the comprehensive and trusted guide for anyone seeking information on this industry. This latest report details global and regional information, including

IHS Markit’s Chemical Economics Handbook –High-Intensity Sweeteners has been compiled using primary interviews with key suppliers and organizations, and leading representatives from the industry in combination with IHS Markit’s unparalleled access to upstream and downstream market intelligence and expert insights into industry dynamics, trade, and economics.