Adiponitrile(ADN) is a key precursor to hexamethylenediamine (HMDA) production. About 90% of HMDA is consumed in the nylon 66 chain, with nonnylon use mostly in hexamethylene diisocyanate (HDI) for high1performance polyurethane paints and coatings, and epoxy curing agents, which have grown strongly in the past five years. HMDA demand has slowly recovered from the 2008 downturn, and is expected to reach a level 14% higher than in 2007.

Demand growth for HMDA in Northeast Asia over the last five years was five times the rate of other regions, increasing at an average rate of 10% per year. HMDA demand in Northeast Asia will continue to be a significant driving factor. Asia will remain heavily dependent on exports from western regions despite the start1up of INVISTA’s HMDA plant in Shanghai, as this capacity is meant to meet China’s increased demand following nylon 66 and HDI capacity expansions. 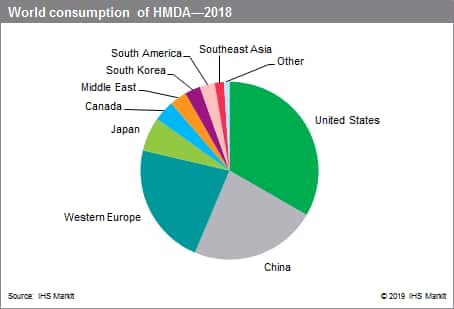 The mature nylon fibers market has the largest influence on world HMDA demand. This correlation, however, plays a less dominant role in Japan and a diminishing role in the United States and Western Europe, as nylon resin begins to account for a larger share of the HMDA market. Demand for nylon fiber continues to be lackluster, especially in the United States and Western Europe, with overall demand growing less than GDP.

HMDA is one of the two components used to manufacture nylon 66; the other component is adipic acid. With the goal of producing 100% bio1based nylon resins, start1up companies such as Rennovia, Verdezyne, BioAmber, and Genomatica have explored and developed bio1based routes to produce adipic acid; some have reached advanced pilot or demonstration scale. Both BioAmber and Rennovia stopped production in 2018. Although oil prices are expected to rise over the next five years, it is unlikely that developers will be able to produce lower1cost bio1based adipic acid using nonfood agricultural feedstocks, which are much lower in cost than hydrocarbon1based feedstocks, in the near future.

Bio1based nylon resins can be used for manufacturing an array of consumer goods and in medical applications. The main comparison between the conventional methods of nylon production and the bio1based methods is the price competitiveness and economics of the raw materials and production processes. A bio1based alternative for HMDA is also being developed, that is used in producing nylon 56 to compete with nylon 66 in both fiber and resin applications. But with oil1based ingredients soon to rise in cost, bio1based alternatives will become more cost1effective. Consumers are pushing for such alternatives in all polymers, but these may or may not be a factor in nylon. Nylon 56 competes with both nylon 6 and nylon 66 in various applications.

Over the next five years, ADN capacity is expected to increase at an average annual rate of 3% to meet the needs of the growing HMDA market. HMDA capacity is expected to remain relatively stable, increasing only minimally. HMDA consumption and production are predicted to grow at a faster average rate of 3% per year through 2023. Trade in HMDA is forecast to grow to 23% of production in 2023 as exports to Northeast Asia rise.