Glycol ethers combine the solubility characteristics of both ethers and alcohols (or esters), as both functional groups (ether and hydroxyl [or carboxyl]) are present in the molecule. Over half of all glycol ether consumption (including E-series and P-series) is for use as a solvent in various formulations, such as paints, inks, and cleaning fluids. Nonsolvent uses for glycol ethers include hydraulic and brake fluids, anti-icing agents, and chemical intermediates.

The global demand for glycol ethers grew significantly during 2016–18, but started to slow in 2019, with a slowdown in the automobile production. The COVID-19 pandemic in 2020 has caused a further 15% decline in worldwide demand. As of 2020, the market has been described by the industry as long. Coatings for the construction and automotive industries have been the hardest hit, while printing inks, agrochemicals, and industrial cleaners have been somewhat less affected. Because of the oversupply situation, the prices of commodity glycol ethers such as EB and PM have been decreasing significantly. As many countries have restarted their industrial activity following the lockdowns imposed during the first half of 2020, demand for glycol ethers is expected to start recovery in 2021 and to reach the 2017 level some time before 2025.

The glycol ether market is a relatively concentrated one, with five major companies, operating mainly in the United States, Western Europe, and mainland China, accounting for more than half of global production capacity in 2020. The market is dominated by Dow Chemical Company, with almost 26% of global capacity, including its 50% share in the Sadara joint venture with Saudi Aramco that started operations in July 2017. 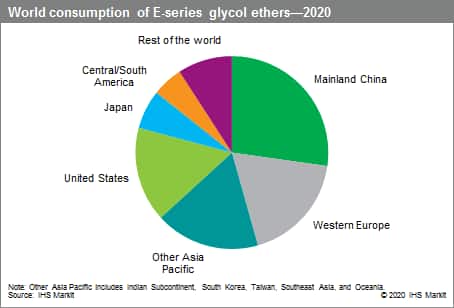 The start-up of the new E-series glycol ether capacity in Saudi Arabia operated by Sadara, coupled with the slowdown in demand that started in 2019, has led to an oversupplied market. However, as only minor new capacity additions have been announced so far, the market is expected to recover in the next few years and reach a better balance by 2025. Future growth will be driven mainly by architectural and industrial coatings, as well as in brake fluids applications. 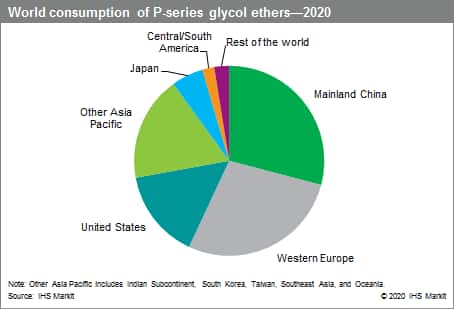 Western Europe is the major producer and exporter of P-series glycol ethers in the world, but mainland China is now the largest consumer, having surpassed Western Europe in 2019. Future growth in mainland China will be driven mainly by architectural and industrial coatings, as well as in brake fluids applications. In the rest of Asia, the market for P-series glycol ethers is not very developed. Japan, South Korea, and Taiwan are the only producers, but consumption is quite large, especially for electronics applications, as these are also the major producers of semiconductors and displays.

IHS Markit’s Chemical Economics Handbook – Glycol Ethers is the comprehensive and trusted guide for anyone seeking information on this industry. This latest report details global and regional information, including

IHS Markit’s Chemical Economics Handbook – Glycol Ethers has been compiled using primary interviews with key suppliers and organizations, and leading representatives from the industry in combination with IHS Markit’s unparalleled access to upstream and downstream market intelligence and expert insights into industry dynamics, trade, and economics.