Identify the organizations and individuals with influence and decision-making power critical to your business success.

Our influence mapping work is the first step to any market entry or stakeholder engagement strategy design. Similarly, we work with clients already operational in a country to help navigate new processes or emerging interests relevant to their sector and operational footprint. Our offering is designed to identify the stakeholders and influence dynamics with the ability to impact both positively and negatively on your business.

We unpack the underlying motivations and agendas of key people at national and local levels. We look at how their actions may drive policy decisions, new risks to your strategy, and possible changes in reigning influence. We work with senior country experts to discuss our analysis and the implications for your business and accelerate your strategy planning and execution. 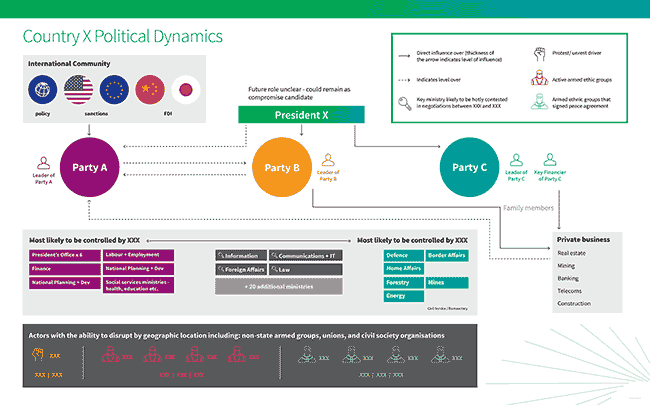 What are the underlying motivations and agendas of key people at national and local levels?
request a meeting 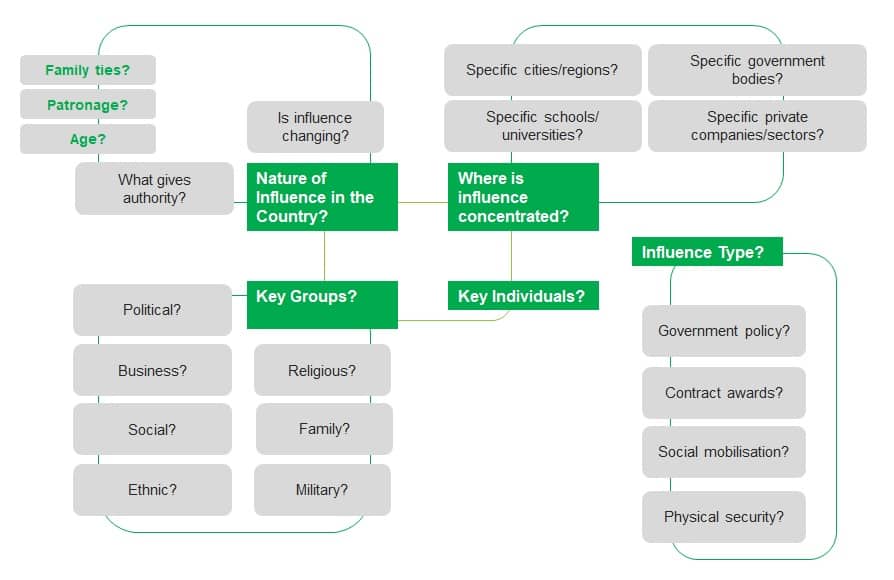 Our IMI survey reveals that US equity investors' risk appetite has deteriorated to the worst level recorded over th… https://t.co/uNQ1hJeQD8

Surging natural gas prices were offset by another large decline in iron ore that pulled our #MPI lower for a sixth… https://t.co/mNAVB4zjYz

Despite increased divisiveness in Canada’s election campaigns, any government make-up will center efforts on Canada… https://t.co/E7zRKhOL5W

Her team is responsible for delivering forward-looking political, industry and economic assessments for government and private sector clients to support strategic planning and business growth. Dr. Wlodarczyk has more than 15 years of experience working on both methodology development and assessment delivery for Economics and Country Risk, as well as forecasts in the private and public sectors. She has supported clients on market entry and risk management for emerging markets for over a decade and has led projects across Africa, the Middle East, Asia and Latin America. She adds particular expertise in analyzing cultural drivers of behavior and decision-making, in particular for mapping of influence groups and dynamics. Dr. Wlodarczyk has a background working in building capacity for conflict resolution in locations with civil conflict, often in Africa. Formerly she was head of Africa Forecasting for Exclusive Analysis, now part of IHS Markit. She has written several articles and book chapters about the impact of belief and culture on behavior in conflict, and she is the author of the book, "Magic and Warfare: Appearance and reality in contemporary African conflict and beyond," published in the US by Palgrave Macmillian. Dr. Wlodarczyk has taught contemporary security issues at UK universities, including the School of Oriental and African Studies (SOAS), University of London, and King's College London (KCL). Dr. Wlodarczyk attained her Ph.D. in War Studies at KCL, and she holds a Bachelor of Science and a Master of Science in International Relations from London School of Economics (LSE), United Kingdom.

She was previously the head of MENA corporate investigations at FTI Consulting where she managed many complex multi-jurisdictional matters in the field of integrity due diligence, asset tracing and litigation support, including in Saudi Arabia, the UAE and Libya.Prior to her move into consulting, she was head of the Middle East and North Africa Country Risk Forecasting team at IHS Markit, responsible for political risk forecasting, scenario modelling and quantitative risk scoring across the whole region. Anna has led on projects including devising a political risk model relating to the security of Qatari food imports, managing a series of in-depth MENA region country studies for a US government client, and war-gaming possible future developments in the Syria conflict. She has provided expert comment to several media outlets including Al Jazeera, Reuters and the BBC. Anna started her career as an Arabic linguist with the Foreign and Commonwealth Office.Anna holds an MA with Distinction in Arabic from the School of Oriental and African Studies, having written her dissertation on 1950s-60s Iraqi poetry. She also holds a 1st class honors degree in Arabic from the University of Edinburgh and studied in Cairo and Damascus. She speaks French and Arabic.

Her areas of specialization include analysis of political developments affecting the offshore energy sector in West Africa, particularly Nigeria; commercial developments, especially in mining, energy, and infrastructure in East Africa; and piracy risks in the Gulf of Aden and Gulf of Guinea. Ms. Tesfay leads the development of the Africa risk indicator and horizon scanning infrastructure, drawing on a range of methodologies such as geospatial analysis and scenario modelling techniques. Natznet supports business growth across the continent, advising C-level executives on market entry, stakeholder engagement and risk management, and African governments on leveraging their natural resource potential for sustained economic growth. In 2017, Natznet was named a Young Global Leader by the World Economic Forum. She regularly speaks in major media outlets and at high-level conferences. Previously, at Exclusive Analysis she managed the Africa intelligence team of in-country analysts and sources, as well as Exclusive Analysis's Johannesburg office. She also advised municipal governments on sustainably developing megacities and national governments on the development of free trade zones, foreign policy and the mining sector in East Africa. Ms. Tesfay's degrees include a BA in Government from Harvard University and a MSc in Urbanization and Development from the London School of Economics.

Mr. Caicedo analyses and forecasts political and violent risks in Latin America. Bringing more than 20 years of experience, Mr. Caicedo shares his expertise in policymaking and its impact on energy and infrastructure in Brazil, the regulatory outlook for Argentina, as well as fiscal and monetary policy across the region. He also covers resource nationalism and the implications in the region for the oil and mining industries. He is an expert in both the Colombia internal conflict and the terrorism threat posed by Mexico's drug cartels. He is regularly interviewed by the media, including CNN, CNBC, Sky News and Bloomberg, among others. Fluent in Spanish, Portuguese and English, he has recently presented to conferences about political risk in Argentina and throughout Latin America and the risks to cargo in Brazil and Argentina. Recent speaking engagements were: the ISMA's conference in Bogota on Drug cartels and crime trends in Latin America and the Reactions North America Insurance conference in New York. Mr. Caicedo's university degrees include a Bachelor of Arts in Philosophy and History from the Saint Thomas Aquinas University, Bogota, Colombia, Master of Arts in Latin America Area Studies from University College London (UCL), UK, and a Post-graduate Certificate in Economics from Birkbeck College, University of London, UK.

Mr. Modad focuses on the conflict between Turkey, the Islamic Republic of Iran and Saudi Arabia and how it shapes security and political risks in the region and terrorism risks in the West. He has also studied the rise of Islamist militant and non-militant groups, their ideology, their capabilities and their communication strategies. Currently, he is focused on the risk of another wave of unrest in MENA, the migrant flows it would trigger and its impact on terrorism. Mr. Modad has briefed executives and directors in insurance the insurance and energy sectors, as well as C-level executives at blue chip firms with interests and operations in MENA. He has helped clients understand the rise of the Islamic State, the conflicts in Libya, Syria and Iraq, risks in Egypt and the conflict between Israel, Iran and the Arabs. Mr. Modad also makes regular appearances on the media, and has been interviewed by Reuters, Bloomberg, the BBC, CNN, ABC News, and others. Mr. Modad holds a Bachelor of Arts in economics from the American University of Beirut, Beirut, Lebanon, and a Master of Science in International Management for the Middle East and North Africa from the University of London in the United Kingdom.

The Integrated Research team works with our experts to combine proprietary data and insights from across economics, country risk, and industry teams to create holistic, forward-looking analysis that helps our clients make effective business decisions. Keerti has previously led the Asia-Pacific desk and the Political Risk desk for our Country Risk team where he was responsible for the global calibration of political and business risks and development of the Country Risk team's methodology. Before joining IHS Markit, he assessed systemic credit and liquidity risks to UK financial stability for the Bank of England; built stochastic models to forecast capital adequacy for financial companies at Moore Stephens Consulting; and worked in RBS's equity derivatives business. Keerti earned a Ph.D. in political economy at the University of Cambridge with a thesis on the social epidemiology of income inequality in India. His previous academic work compared Indonesia and Malaysia during the Asian Financial Crisis.

Her area of focus includes American Samoa, Guam, and Micronesia. She has researched this area of the Pacific for more than 20 years. She gai

While managing a team of economists, Ms. Kish has built strong relationships with clients who call on her for a straight-forward picture of