Formaldehyde is the most commercially important aldehyde. Production of urea-, phenol-, and melamine-formaldehyde resins (UF, PF, and MF resins) accounts for nearly 70% of world consumption of formaldehyde in 2017; other large applications include polyacetal resins, pentaerythritol, methylenebis (4-phenyl isocyanate) (MDI), 1,4-butanediol (BDO), and hexamethylenetetramine (HMTA). Most formaldehyde producers are concerned primarily with satisfying captive requirements for derivatives and/or supplying local merchant sales. Formaldehyde is usually produced close to the point of consumption since it is fairly easy to make, but it is costly to transport and can develop problems associated with stability during transport. As a result, world trade in formaldehyde is minimal.

The following pie chart presents world consumption of formaldehyde in 2019: 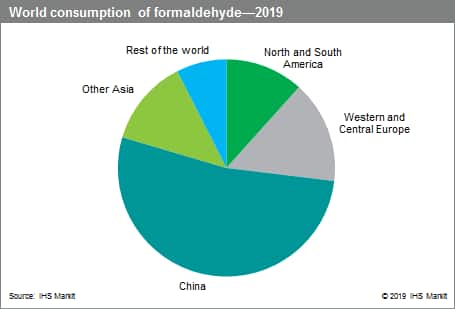 Construction and remodeling activity, vehicle and furniture production, and original equipment manufacture (OEM) account for most world consumption of formaldehyde. Demand for these markets is greatly influenced by general economic conditions. As a result, demand for formaldehyde largely follows the patterns of the leading world economies. Formaldehyde resins are used in the wood products industry predominantly as adhesives. Growth of these resins is strongly correlated to construction and remodeling activity, and to a lesser degree, the automotive industry.

Concerns over possible human carcinogenicity from exposure to formaldehyde have been a controversial issue. Numerous studies assessing the human risk of low-level exposure to formaldehyde have been conducted; interpretation of study findings has been varied. The lack of conclusive evidence has led to widespread disagreement among industry, government agencies, and unions regarding the appropriate risk assessment for formaldehyde.

China is the single-largest market for formaldehyde; other countries with large markets include the United States, Germany, the Netherlands, Spain, Italy, Belgium, Poland, Russia, India, South Korea, Japan, Brazil, and Canada. China is forecast to experience a slower growth during 2019–24. Demand for 37% formaldehyde in the United States is forecast to grow, driven primarily by UF resins, PF resins, and MDI. Western Europe, Central Europe, the Middle East, the Indian Subcontinent, and South America are also expected to show large volume increases as a result of increased production of wood panels, laminates, MDI, and pentaerythritol, and the start-up of polyacetal resin production in the Middle East.

Increasing production of wood-based panels and laminates for both domestic use and exports is largely the driving factor for increased demand, in addition to strong demand for chemical derivatives in markets such as China and other countries in Asia (excluding Japan). Overall, economic performance will continue to be the best indicator of future demand for formaldehyde.

IHS Markit’s Chemical Economics Handbook –Formaldehyde is the comprehensive and trusted guide for anyone seeking information on this industry. This latest report details global and regional information, including

IHS Markit’s Chemical Economics Handbook –Formaldehyde has been compiled using primary interviews with key suppliers and organizations, and leading representatives from the industry in combination with IHS Markit’s unparalleled access to upstream and downstream market intelligence and expert insights into industry dynamics, trade, and economics.