Fluoroelastomers are fluorine-containing polymers noted for their exceptional resistance to heat, weathering, and a wide assortment of fluids and chemicals, as well as for their exceptional sealing and mechanical properties. The working temperature range for fluoroelastomers is considered to be -26°C to 205–230°C, but for short working periods they will take even higher temperatures. Some perfluorocarbon elastomer types can resist temperatures up to 327°C. Components fabricated from fluoroelastomers, like certain O-rings, gaskets, and hoses, are essential for industries such as automotive, aerospace, and others, usually providing reliable, leak-free function. Fluoroelastomers are used mainly in seals and barrier layers subjected to environments too severe for other elastomers.

This report covers the three major types of polymers: 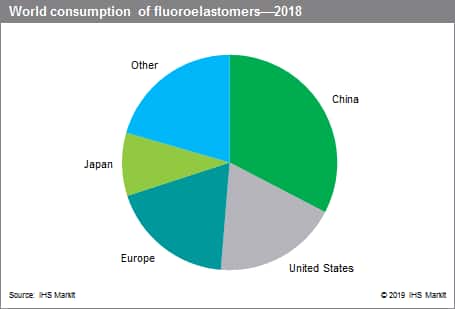 The global market for fluoroelastomers has been driven largely by the rapid development of the Chinese automotive industry in the past decade, as well as by the recovery from the economic crisis in late 2008 and the entirety of 2009. The financial crisis hit the automotive industry in the United States, Europe, and Japan particularly hard. Based on volume (base raw material), China accounted for 33% of world consumption in 2018, with Europe and the United States accounting for 19% each, and Japan for 9%. These four regions represented about 80% of the world consumption of fluoroelastomers in 2018.

Fluorocarbon elastomers (FKMs) account for about 92% of the world market for fluoroelastomers. They are noted for their exceptional resistance to heat, weathering, and a wide variety of fluids and chemicals, as well as for their excellent sealing and mechanical properties. They are used in highly demanding applications where extreme temperature ranges and chemical attack are encountered. Solvent resistance is generally high. However, it is costly to compound these polymers.

China has surpassed Western Europe and the United States since 2010 and is now the largest global market for FKMs. By 2023, China is forecast to further enhance its leading position in FKM consumption, mostly as a result of increased Chinese automobile production during the forecast period. From 2018 to 2023, automobile production in China is expected to grow steadily at an average rate of 2.5–3% per year, with a growing proportion of passenger vehicles and highend light vehicles that consume more FKM parts. China has also become a major net exporter of FKMs in the last few years.

Fluorosilicone elastomers are also known as fluorovinylmethyl silicone rubber. Fluorosilicones are inherently UV and ozone resistant and have a combination of fluorocarbon and silicone characteristics. They resist solvents, fuels, and oil similarly to fluorocarbons and have high- and low-temperature stability (usable up to 177°C and at temperatures as low as - 73°C) similar to silicones. The primary disadvantage is their lack of toughness and abrasion resistance, giving them limited usefulness in dynamic sealing applications. Fluorosilicones are widely used for static applications in aerospace fuel systems and in automotive fuel emission controls, where the fluids of fuels, coolants, and oils would cause most other products to deteriorate. Fluorosilicones account for almost 8% of the world market for fluoroelastomers.

Perfluoroelastomers are a specialty high-performance elastomer with exceptional chemical resistance properties and high-temperature stability. They are resistant to more than 1,800 chemical substances (including ethers, ketones, esters, aromatic and chlorinated solvents, oxidizers, oils, fuels, acids, and alkali) and are capable of handling service temperatures up to 327°C. The primary areas of application are in paint and coating operations, oil and gas recovery, semiconductor manufacture, and in the pharmaceutical, chemical process, and aircraft and aerospace industries. Perfluoroelastomers can be used for all applications where the properties of regular fluorocarbon elastomers are not sufficient. Their most important feature is their extreme reliability.

Total consumption of the three major fluoroelastomers is forecast to grow at an average annual rate of about 2.5% through 2023. Major market drivers are new product developments in sealing applications (better performance), further tightening of emissions standards in many of the industrialized countries, and strong expansion and resurgence in automobile production.